Posted by Overseas Review at 10:13 PM No comments: 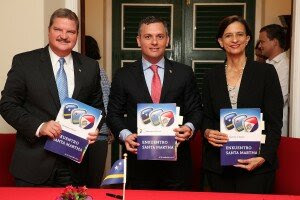 WILLEMSTAD/GREAT BAY – Prime Minister Sarah Wescot-Williams and Prime Minister Gerrit Schotte are the co-authors of the request for the Kingdom Conference on December 14 to examine the possibility of a termination date for the Consensus Kingdom Laws agreed to and established as part of the process of constitutional change. One that Wescot-Williams definitely wants reviewed is the Consensus Kingdom Law Financial Supervision.

Wescot-Williams put this position on table during a meeting with her colleague prime ministers at a summit in Curacao on Monday. During the meeting she called the law on financial supervision an eyesore and a straightjacket.

“We cannot discuss the future of the Kingdom if the Netherlands is not willing to talk about current problems that we face. There were a series of laws introduced at Kingdom level, and we only now see their effects in practice. So there is a strong need for evaluation. We have been busy setting up a number of institutions for checks and balances and giving content to the Kingdom Laws. This has been no easy chore for our young country. Therefore it is vital that we as partners in the kingdom take a very good look at these laws and, where necessary, terminate and/or modify them,” Wescot-Williams said.