IN HONOUR OF ILLUSTRIOUS SONS

Alexander F. Gittens
1804caribvoices
APRIL 10, 2014 - 4:52 AM
1804caribvoices joins the international community in mourning the passing of two of CARICOM’s most distinguished sons.  The region has lost two great minds and patriots.  We mourn the passing yet celebrate the life and legacy of former Trinidad and Tobago Prime Minister and President, Arthur Napoleon Raymond (ANR) Robinson and distinguished scholar, thinker and integrationist, Professor Emeritus Norman Girvan.  Their contributions to the regional and international  communities will have a lasting impact.

Arthur N.R. Robinson will be remembered for, among other things his courageous position in the face of  grave personal danger when the country and seat of power were threatened.  The phrase “murderous scoundrels… attack with full force” – his command to the military, in response to demands to surrender the country and democracy to insurgents, has become part of his epithet and continues to inspire citizens of Trinidad and Tobago.
ANR Robinson’s legal and intellectual contribution to the formation of the International Criminal Court  places him in the pantheon of exceptional Caribbean and international leaders.  1804caribvoices remembers Arthur Napoleon Raymond Robinson.
1804caribvoices also remembers its founder, Professor Emeritus Norman Girvan.  “Prof” as he was fondly called by his students, colleagues and comrades, leaves a great legacy.  His contribution to the regional integration project will not go unnoticed.  He was an integrationist to the core.  Norman was an intellectual giant yet remained humble and simple. In the coming weeks, months and years, his name will be mentioned in the same breath as CLR James, W. Arthur Lewis, Lloyd Best and Walter Rodney, to mention a few.

Professor Girvan’s contribution to the Caribbean, the Global South and indeed the international community goes back decades.  He was the second Secretary General of the Association of Caribbean States; Senior Lecturer in Economics at the University of the West Indies in Jamaica; Senior Research Fellow at the United Nations African Institute for Development and Planning in Dakar; Regional Coordinator of the Caribbean Technology Policy Studies Project of the University of the West Indies/University of Guyana; Chief Technical Director of the National Planning Agency of the Government of Jamaica; Director of the Sir Arthur Lewis Institute of Social and Economic Studies; Visiting Fellow at the Universities of Chile, McGill, Northwestern, Sussex and Yale; and visiting consultant to the South Center.  In all of this he remained just Norman.
I am sure many who knew Norman better than I do and will offer personal stories about him.  1804caribvoices will give them the opportunity so to do.
Today we remember and celebrate the life, contributions and achievements of two of the Caribbean’s finest.  1804caribvoices especially feels the loss of Professor Girvan whose vision for a united Caribbean and confidence in future generations to achieve that dream, joined with colleagues and his former students, to unselfishly form 1804caribvoices: Pan-Caribbean voices for Integration and Social Justice.  His confidence was not ill placed.
In what must be fate, Norman passed in Cuba, a country he held dearly.
1804caribvoices knows that a brief statement on these two illustrious sons will not suffice so we dedicate at least the next two weeks to reflect and honour them and to give expression to the many voices which will certainly want an opportunity to pay homage to our brothers and comrades.  We extend sincerest condolences to the families of Arthur N.R. Robinson and Norman Girvan.  Your loss is shared by us all.
To ANR Robinson and Norman Girvan, your labours have not been in vain.  You fought a good fight.  You finished the course.  You kept the faith.  You have inspired generations and we will continue the work, as you indeed continued from those who went before.  We will houour you and your legacy.  A luta continua, Vitoria e certa!

Posted by Overseas Review at 6:14 PM No comments: 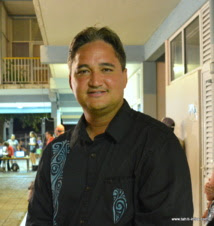 Posted by Overseas Review at 11:58 AM No comments: