"I was born in 1969. For the four first years of my life, thirty one atomic bombs exploded in the sky, in my childhood backyard. Unlike radiation, I am not invisible - nor are all children born after 2nd July 1966, and their parents who worked at Moruroa or around. Today, tomorrow, our eyes will keep staring at the U.N, until justice is served." 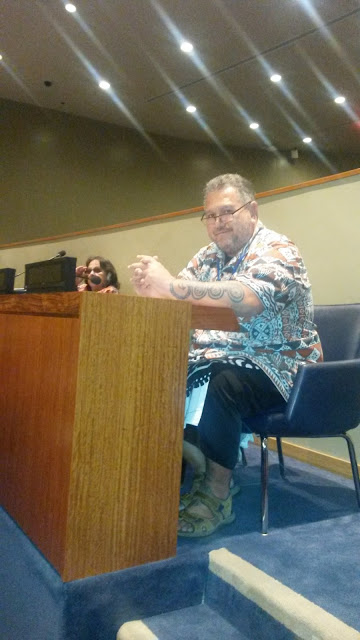 Distinguished members of the Special Committee on Decolonisation,

I extend my warm regards from the people of Ma'ohi Nui for this opportunity to address you on the Question of French Polynesia.

The effects of nuclear testing on a people can no longer be regarded as an issue solely between the administering power and its non-self-governing territory. Issues of reparations for the gross violation of the human rights through massive exposure to radioactivity for 30 years of atmospheric and underground testing by France can be easily pushed aside under the guise of national security, and information vital to address the damage rendered inaccessible.

It is critical that the impact on the people of Ma'ohi Nui be addressed by the United Nations (U.N.) and its affiliated institutions for the true nature of such exposure and ongoing effects to be properly understood without the filter of the perceived military strategic context of an administering Power. Only then shall the appropriate compensation to the victims and their families be accurately determined and subsequently addressed.

As indicated in the relevant General Assembly resolutions on French Polynesia since 2013 - most recently in Resolution 70/100 of 9 December 2015, the aftermath of French nuclear testing continues to plague our people, victims of 193 atmospheric and underground nuclear tests from 1966 to 1997, equivalent to 720 Hiroshima bombs in our atmosphere, and 210 underground.

As former President of French Polynesia, Oscar Termaru has told Pacific leaders, "Our people are dying of several nuclear related illnesses that are bound to be passed to many generations to come." Since our re-inscription in 2013, these issues emanating from the relationship between the territory and the administering Power are properly subject to international scrutiny pursuant to the U.N. Charter. Noticeably, the request to the Secretary-General for a study to be conducted on the "environmental, ecological, health and other impacts as a consequence of the thirty year period of nuclear testing" in French Polynesia. We express our appreciation of the member States for their authorization of this study.

However, even though that report was released in July 2014, it was rather curiously circulated one month after the Special Committee on Decolonization completed its work for that year. Therefore, there was no opportunity to discuss the findings in the C-24 following the publication of the Secretary General's report.

Moreover the content of the report was far from comprehensive, comprising a mere compilation of replies from just two U.N. agencies out of some 22 requests for information. It barely addressed the issue, and failed to assess the impact experienced today by thousands of our people still awaiting justice for this blatant disregard of humanity. One of the references in the report was to an outdated 1996 International Atomic Energy Agency (IAEA) study which said at the time that the impact to the health of the Ma’ohi people as a result of the nuclear tests was negligible.

That this finding has been proven to be grossly premature is an understatement. The IAEA could be particularly useful in assisting us in a more comprehensive approach to this issue, consistent with the mandate of the General Assembly for the U.N. specialized agencies to assist the non self-governing territories.

A subsequent document of the U.N. Scientific Committee on the Effects of Atomic Radiation - not referenced in the Secretary General's Report - quite properly found “that the testing of nuclear weapons in the atmosphere involved unrestrained releases of radioactive materials to the environment locally, regionally and globally (depending on the altitude of the explosion), causing the largest collective dose thus far from manmade sources of radiation."

A stakeholder statement presented to the 2013 Human Rights Council Universal Peer Review of France concluded that 17 years after the last French nuclear test was held in the Pacific, our people are still "living with the legacy of hundreds of nuclear tests."
Mr. Chairman,

We are fortunate to be able to draw on the 2014 Independent Report on "The French Nuclear Testing in French Polynesia" prepared by renowned scientists that provides a comprehensive analysis of the impacts of nuclear testing worthy of member State consideration.

Consistent with established practice, such report can be issued as document of the General Assembly under the relevant agenda items - in this case, items on decolonization, human rights, and disarmament among others. We reiterate our request for the Committee to publish this independent report as a document of the General Assembly so that it becomes a part of the substantive documentation as we recognize that certain political pressures on the U.N. bureaucracy might not facilitate the comprehensive review for it might reveal inconvenient truths about the impact of the nuclear testing on our people.

We also reiterate our earlier request that this Committee call on the U.N. Scientific Committee on the Effects of Atomic Radiation to add the impact of the nuclear testing in French Polynesia to their substantive work program. We shall raise these issues at an upcoming session of the Human Rights Council.

We recall to the attention of this Committee the adoption by the Assembly of French Polynesia in November 2014 of a resolution calling upon France to acknowledge the colonial nature of its nuclear testing programme in Ma’ohi nui. The resolution created an expert committee to assess and evaluate the financial damages caused by the occupation.

This resolution was provided to the Committee of 24 in 2015 for the information of member States, and it was natural to expect that reference would have been made to this important development in the subsequent 2015 and 2016 Secretariat Working Papers on French Polynesia. We also assumed that a development of this magnitude - in this case, a proper decision of the elected Assembly of the territory - would have been included in the draft resolution on French Polynesia last year.

To our disappointment, the reference to the legally constituted decision of our elected Assembly was glaringly absent.

So we were quite surprised that there was no reference to the French Polynesia Assembly resolution on compensation for nuclear testing in either the Working Paper, the draft resolution, or any other relevant U.N. documentation on the territory.

Are we to assume that these developments were not worthy of U.N. consideration? Or was there undue pressure exerted by the administering Power behind the scenes, to censor such references? In any case, we will continue to watch the documentation closely going forward with eyes wide open.

The effects of atomic radiation know no political boundaries. Yet, it is precisely because of our dependency status that the survivors have been denied justice and reparation. We take seriously the decision of the General Assembly to re-inscribe our territory which had been unilaterally removed from the U.N. list. We now fully expect that the mandates that you approve are effectively carried out to the fullest. We expended significant energy and resources to be re-inscribed so that our process of decolonization would be realized. We remain committed to this end, and intend to work closely with this committee in pursuit of that goal.

I was born in 1969. For the four first years of my life, thirty one atomic bombs exploded in the sky, in my childhood backyard. Unlike radiation, I am not invisible - nor are all children born after 2nd July 1966, and their parents who worked at Moruroa or around. Today, tomorrow, our eyes will keep staring at the U.N, until justice is served.

Thank you, Mr. Chairman.
Posted by Overseas Review at 11:48 AM No comments: