ORANJESTAD – “We do not want to wait until the decision to keep elections on St.Eustatius is made. We want to mobilize the people to fight for their democratic right to elect their own representatives. Therefore, this is an infringement”, says Xiomara Balentina President of the Brighter Path Foundation.

On Tuesday, February 13, a petition called: “KEEP Island Council Elections in St. Eustatius in March 2019” was started on the online petitioning website change.org. Elections will be held in the BES islands in March next year, but Dutch State Secretary of Kingdom Relations Raymond Knops said at the town hall meeting at St.Eustatius that there is a great possibility that Statia’s elections will be ‘postponed until further notice’.

The Hague took over the management of the special municipality of St. Eustatius at the beginning of this month. Marcolino Franco, former Curaçao MP, is appointed as government commissioner of the island for the time being.

Balentina continued, “The petition drive is also to keep this cause alive and gather international attention. We have received a lot of support from the Dutch Kingdom and outside of the kingdom. People within the Kingdom are extremely concerned about this case.” 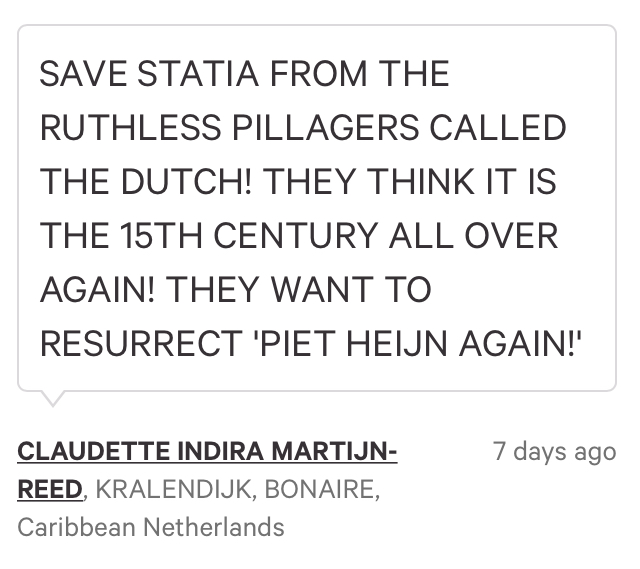 “Save Statia from the ruthless pillagers called the Dutch! They think it is the 15th century all over again! They want to resurrect “Piet Heijn again!” says Bonaire resident Claudette Mertin-Reed, who signed the petition.

Laura Piechutzki, Kings Well Resort owner, who also signed the petition said, “I was born free and have lived free…till now…and I want to continue to be free..only slaves allow others not If we do not respect ourselves, do not expect others to respect us. elected by them to rule them…” 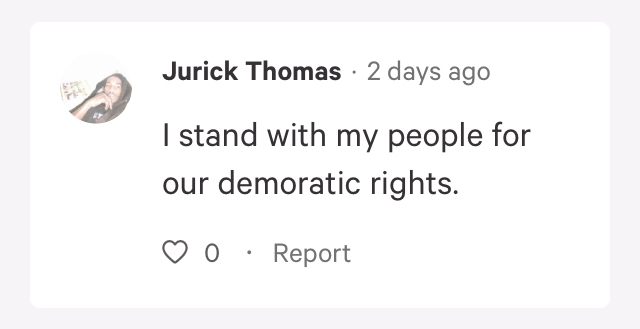 With the indefinite postponement of elections, the democratic order is all but erased and the citizens of St. Eustatius have been stripped of their democratic rights of participation and representation.

“Being able to elect your representatives is a basic human right in a democracy. If one single person demands respect for that right, he or she should be heard”, expressed former Commissioner and co-founder of Pro Statia Glenn Schmidt.

Signed St. Maarten resident Jurick Thomas, “I stand with my people for our democratic rights.” “It is the democratic thing to do”, stated signed Saba resident Roekje Simmons.

“If we do not get our wish as a foundation, we are strategising as to how we are going to keep this case alive. We are going to continue to fight until elections are resumed on Statia”, according to Balentina.

Once the signatures have been collected it will be sent to the Dutch Minister of Interior and Kingdom Relations Kajsa Ollongren, the Secretary of State for Kingdom Relations Raymond Knops, and the First and Second Chamber of Parliament in the Hague.

Hard copies
A week later the petition gained 347 signatures. Hard copies of the petition are also placed at key positions on Statia, an island with approximately 3800 inhabitants.

Posted by Overseas Review at 12:06 PM No comments: