University of Guam to hold Public Forum on Decolonization 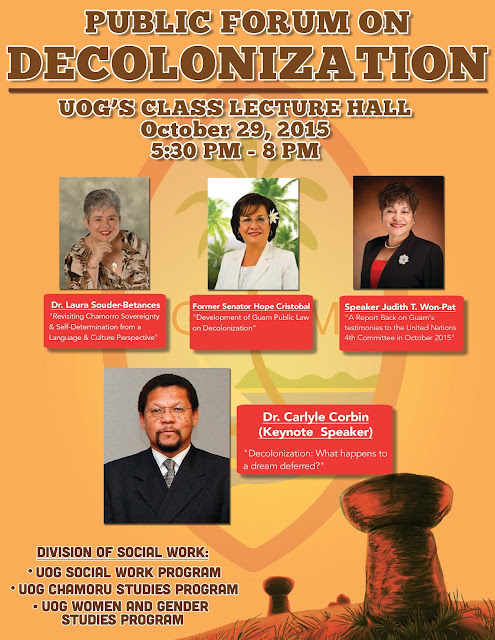 Mangilao, Guam – The University of Guam will be hosting a public forum on decolonization at the CLASS Lecture Hall on October 29, 2015 from 5:30 PM – 8 PM. This event is sponsored by the Divisions of Social Work, Chamorro Studies, and Women and Gender Studies.

The forum will feature four panelists, including Dr. Carlyle Corbin, who is an international advisor on governance and the present Executive Secretary of the Council of Presidents of the United Nations General Assembly. Dr. Corbin is a noted global expert on decolonization from the U.S. Virgin Islands and has lectured on this topic throughout the world. He stated, “Decolonization is recognized by all the nations of the world as a fundamental human right, but its completion has been deferred in relation to the remaining 17 small island territories including Guam and my own Virgin Islands.”

Panelists are as follows and will speak on the following themes:

Speaker Judith T. Won Pat- “A report back on Guam’s testimonies to the United Nations 4th Committee in October 2015”

The forum is a chance for the people of Guam to learn more about Chamorro Self-Determination, as the government postures to hold a plebiscite in the near future. There will be an opportunity to register for the Guam Decolonization Registry at the event.

"3. Further reaffirms that it is ultimately for the peoples of the Territories themselves to determine freely their future political status in accordance with the relevant provisions of the Charter, the Declaration and the relevant resolutions of the General Assembly, and in that connection reiterates its long-standing call for the administering Powers, in cooperation with the territorial Governments and appropriate bodies of the United Nations system, to develop political education programmes for the Territories in order to foster an awareness among the people of their right to self-determination in conformity with the legitimate political status options, based on the principles clearly defined in Assembly resolution 1541 (XV) and other relevant resolutions and decisions."

Taking note of the working paper prepared by the Secretariat on Guam and other relevant information,


Noting the statement made by the representative of the Governor of Guam at the Pacific regional seminar held in Nadi, Fiji from 21 to 23 May 2014, presenting an update on the efforts of Guam towards decolonization and on the engagement of the Guam Commission on Decolonization for the Implementation and Exercise of Chamorro Self-Determination in reinforcing public awareness in order to address the limited and distorted understanding of decolonization,

Recalling that, in a referendum held in 1987, the registered and eligible voters of Guam endorsed a draft Guam Commonwealth Act that would establish a new framework for relations between the Territory and the administering Power, providing for a greater measure of internal self-government for Guam and recognition of the right of the Chamorro people of Guam to self-determination for the Territory, Aware that negotiations between the administering Power and the territorial Government on the draft Guam Commonwealth Act ended in 1997 and that Guam has subsequently established a non-binding plebiscite process for a self-determination vote by the eligible Chamorro voters,

Cognizant of the importance of the administering Power continuing to implement its programme of transferring surplus federal land to the Government of Guam, Noting that the people of the Territory have called for reform in the programme of the administering Power with respect to the thorough, unconditional and expeditious transfer of land property to the people of Guam,

2. Calls once again upon the administering Power to take into consideration the expressed will of the Chamorro people as supported by Guam voters in the referendum of 1987 and as subsequently provided for in Guam law regarding Chamorro self-determination efforts, encourages the administering Power and the territorial Government to enter into negotiations on the matter, and stresses the need for continued close monitoring of the overall situation in the Territory;

3. Requests the administering Power, in cooperation with the territorial Government, to continue to transfer land to the original landowners of the Territory, to continue to recognize and to respect the political rights and the cultural and ethnic identity of the Chamorro people of Guam and to take all measures necessary to address the concerns of the territorial Government with regard to the question of immigration;

4. Also requests the administering Power to assist the Territory by facilitating public outreach efforts, including through the funding of the public education campaign, consistent with Article 73 b of the Charter, and in that regard calls upon the relevant United Nations organizations to provide assistance to the Territory, if requested, and welcomes the recent outreach work by the territorial Government;

5. Further requests the administering Power to cooperate in establishing programmes for the sustainable development of the economic activities and enterprises of the Territory, noting the special role of the Chamorro people in the development of Guam.

Posted by Overseas Review at 11:20 PM No comments: