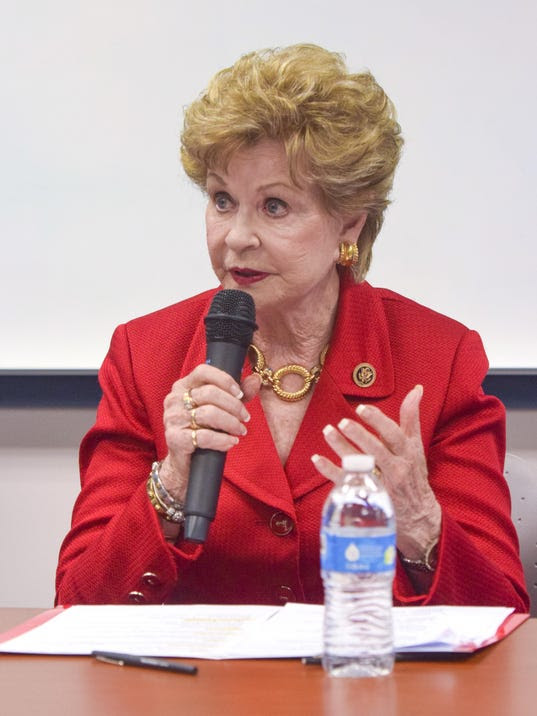 
The U.S. House of Representatives once again is considering whether to allow members from the territories, including Guam Del. Madeleine Bordallo, and the District of Columbia to have a symbolic vote during the Committee of the Whole.

Unlike other members of Congress, the delegates from the territories and the District of Columbia do not have the right to vote on the passage of legislation, unless Congress amends its rules to allow them to vote.

“I thank our Democratic Whip, Congressman Steny Hoyer, for again urging the Republican Majority to amend the Rules of the House to permit the Delegates from the territories and D.C. to vote in the Committee of the Whole. Whip Hoyer has been a firm supporter of the territories, and I appreciate his consistent leadership in working to ensure that votes cast in the House reflect the voices of all Americans,” Bordallo stated Wednesday. “I testified before the Rules Committee in September to encourage this rule change, and I believe that doing so would allow the territories’ voices to be heard more fully during debate on the House floor. It would give us parity with other members (?) and strengthen the long-cherished values of the House.”
Here is a partial transcript of the Sept. 14 hearing, when Bordallo testified before the House Committee on Rules, asking that the rules be changed to allow territorial delegates to vote:
Bordallo: Members of the committee, I request that the House rules be amended for the 115th Congress to permit the delegates and the resident commissioner to cast votes when we are debating amendments and legislation in the committee of the whole. Same as was granted in the rules of the House for the 110th and 111th Congress. Votes cast by members of Congress make us accountable to our constituents and allow them to understand where we stand on important issues. The rules that were adopted by the 112th, 113th and the 114th Congress denied these voting rights for members from the territories and the District of Columbia. It makes the house less responsive to the more than 4 million Americans who live in these districts.
Extending voting rights would be wholly symbolic. Our votes cannot change the outcome of legislation or amendments considered on the floor. However, these votes allow us to ensure that the needs of our constituents are addressed.

Further, many of our nation’s men and women in uniform are residents of the territories and D.C. These dedicated service members sacrificed much for our country, and many have paid the ultimate sacrifice. In fact, the per capita death rate for service members from the territories is higher than most states. Beyond high levels of military service, residents from the territories and D.C. contribute to and serve our nation in all other aspects of American life. Yet, we, their representatives in Congress, are denied the very basic right to vote on matters that impact their very lives.

Permitting the delegates and the resident commissioner to cast votes in the Committee of the Whole will not lessen the representation of the 435 members, rather it would allow territories’ voices to be heard more fully. It will give us parity with other members (?) and strengthen the long -cherished values of this body.
I want to leave you, Mr. Chairman and ranking member, with something that one of my predecessors, Guam’s former Republican congressman and general, Ben Blaz, told me when I was first elected to Congress, in 2003. He said, that as a delegate from a territory who could not vote on the floor of the House, and, I quote, “I would be a member of Congress, but not one of its members.” So I hope that this rule will be changed.”
Rep. Steve Stivers, R-Ohio: You already said this, but I want to make sure I understand it. You would give voting rights to the resident delegates, but they could not change the outcome of a vote?
Bordallo: If the vote would be a tie on amendments, then they would vote again, leaving us out. So it makes no difference, whatsoever. It’s just the idea of being down on the floor with our colleagues, and then letting our constituents know how we stand on these issues.
Rep. Louise Slaughter, D-New York, Rules Committee ranking member: “It seems a terrible thing to ask a member to come all the way from Guam and not be able to participate in a lot of things we’re doing. And I thought it worked out very well. As you pointed out, if there’s a tie, they re-vote and take the delegates out.
Bordallo: “It’s simply symbolic”
Slaughter: Right, but an important symbol, and you’re here. I think we need to do that.”
Rep. Dan Newhouse, R-Washington: This is an interesting idea, that you’ve brought forward, and I’ve often wondered that myself, why territories are not allowed to vote, although you have voting privileges in committee, correct?
Bordallo: In committee, that’s correct.
Newhouse: So if you’re asking for a symbolic vote on the floor, I’m not sure how that gives you parity, if you could help me understand that. If it’s only symbolic, you’re not quite there, and you do have the opportunity to express your opinions clearly in committees. So if your complaint is that you can’t express how you feel on issues to your constituents, there’s an opportunity there.
Bordallo: I guess in answer to you, Mr. Newhouse, is the fact that you’re elected to a body and you are not allowed to go on the floor at all. We don’t vote for final passage. That’s even a disparity, in my opinion. But to not be able to go down and vote when there’s a committee of the whole — It’s a matter of just going down on the floor and meeting our colleagues once in a while. I’m very seldom down on the floor because we don’t have a vote — the Committee of the Whole or final passage. I think it’s just a matter of belonging to a family, the House family.
Newhouse: So, only in the event of a tie would those votes then be discounted?
Bordallo: That’s right.
Slaughter: It seemed to work pretty well. At least I don’t recall hearing any complaints about it. And it did make people who’ve come a great distance to get here really feel like a part of what was going on.
Bordallo: Most important, too, is our constituents don’t know where we stand, because our votes are never publicized or whatever. We may be on the bill as a cosponsor, but
Newhouse: Aren’t committee votes publicized?
Bordallo: Yes, they are, but in every aspect. I’m on defense and I’m on natural resources, but what about all the other – the health, the education committees, and so forth? And we did have it in two congresses. We did have the right to vote, but it was taken away then, when the parties changed.
Rep. Pete Sessions, R-Texas, Rules Committee chairman: Bringing the issue up is important. I’m not promising any change this time, but you are ensuring that there will be a discussion. And I think from that perspective, you would not consider that a victory, but that we do recognize what we’re doing and we probably need to get better at it.
Bordallo: I just want to make it very clear that, although we wish could have final vote on the passage of bills, we’re just asking for this Committee of the Whole vote. And I understand it has been through various courts and it’s come out affirmatively. So I want you to know there’s been some background done on this. And, as I said, it’s just a symbolic vote, and we represent 4 million American citizens.
Sessions: Yes, ma’am, but you don’t come from States.
Bordallo: Well, I guess you could say that.
Sessions: I guess I could.

Posted by Overseas Review at 11:32 PM No comments: