Why was there no U.N. webcast of Puerto Rico hearings? 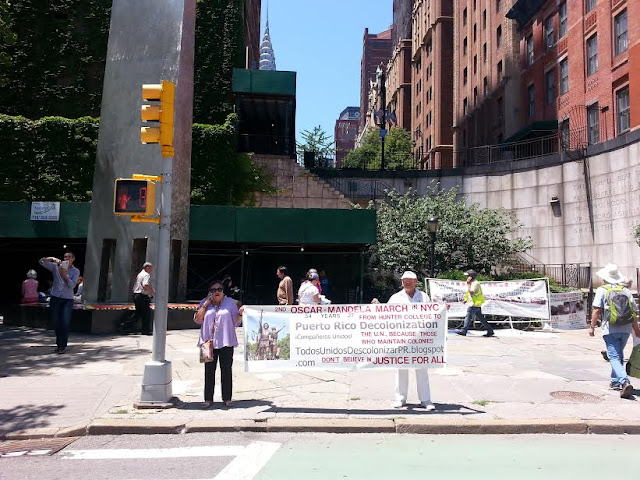 Every Monday after Father’s Day, the United Nations (UN) hold a hearing to discuss Puerto Rico’s colonial relationship with the United States government. The most significant development this year’s hearing was the Special Committee for Decolonization’s (C-24) President’s comments before the petitioners were allow to address the committee. I was petitioner number 7.

The C-24 President said that he was sorry to have to make such a comment. He stated that he felt that he had been disrespected by the UN. He goes on to explain how he had been assured that this year’s hearing would be broadcast live, and then at the last minute, told it would not. The logical question is, why hasn’t these hearings been broadcast live before?

This committee is charged with eradicating the world of its 17 last colonies. One would think that the committee (C-24) would be authorized by the United Nations (UN) to use everything at its disposal to get the work done! The UN has its own radio and television stations. Isn’t it odd that, until we asked, that the committee hasn’t been broadcasting live these hearings on its own initiative? Isn’t it also remarkable that these annual hearings are not broadcast on Puerto Rico’s own government’s radio and TV stations? It is obvious that there is a strong interest to maintain Puerto Rico as a United States colony forever! The following is the chronology of events leading to the committee’s president’s comment.

Radio station InformacionAlDesnudo.com decided to feature on three consecutive Saturdays, June 6, 13, and 20th from 7 to 9 PM, the Monday, June 22, 2915 United Nations (UN) hearing concerning the decolonization of Puerto Rico. On the June 20th program, the entire Puerto Rican delegation petitioning the UN was invited to tell us what it will say there on Monday.

InformacionAlDesnudo.com decided that the logical culmination to our series would be to be able to tell our listeners where to hear the hearing live. When we searched for such a station, we realized that there was none. Still more incredible was the fact that not even the UN was going to broadcast this hearing live. And even still more incredible enough was the fact that Puerto Rico’s government owned radio an TV station, WIPR would not be broadcasting it either! Isn’t democratic governments supposed to be of the people, by the people and for the people? Why aren’t the people of Puerto Rico not being made aware firsthand about their own decolonization?

I wrote a certified letter to the Secretary General Ban Ki-moon about it. I sent an email to the president of the UN’s Special Committee for Decolonization (C-24). I got no response from the Ban- Ki-moon, but by was if the C-24, I received 2 emails.

Three days later, I receive that last email about this. The same secretary thanked me for my offer, but that the financing had to be done by member states of the UN. I then thank him for his time in this matter.

The morning part of hearing was not recorded which is an aberration for the UN. The afternoon, however, recorded, but not in the usual professional manner. Click on this link to see the sloppy manner in which it was done. It is amazing how the other events the UN broadcasts are professionally produced, and either the UN blacks it out, or drags its feet to the extent that eventually led to this pitiful piece of “journalism”. http://webtv.un.org/search/4th-meeting-special-committee-on-the-situation-with-regard-to-the-implementation-of-the-declaration-on-the-granting-of-independence-to-colonial-countries-and-peoples/4314142267001?term=puerto Rico

The Puerto Rican Independence Party (PIP) will be presenting a bill in the colonial legislature to broadcast in the future the UN’s Puerto Rico Decolonization Hearing in New York City. We don’t know why the PIP hadn’t done already from the very moment that the party was founded! Nevertheless, we totally support its proposal!

If we succeed to get out of the closet Puerto Rico’s colonial relationship with the United States government, the worldwide discussion that will occur will eventually lead to our independence. But before that happens, we must continue to protest tirelessly for that, because as we have said all along, those who have a 117 year old colony, without a doubt, don’t believe in justice for all!
Posted by Overseas Review at 2:04 PM No comments:

The Hague, Netherlands: the heat is on

The police killing of Mitch Henriquez has led to three nights of protest and anti-police resistance in The Hague, Several hundreds of young people were out on the hot streets, confronting the cops

The police killing of Mitch Henriquez has led to three nights of protest and sometimes surprisingly serious anti-police resistance in the Schilderswijk neighbourhood, in the Dutch city The Hague. It is a neighbourhood where the majority of the people living there is of migrant background. Several hundreds of young people confronted the cops for hours on Monday night and again on Wednesday night. But streets in the neighbourhood were not exactly quiet on Tuesday night either.

The immediate cause of the anger was the death of Mitch Hernandez, an Aruban man who was in The Hague to visit family. He was on a festival, basically having fun. Police overheard him claiming he had a gun, jumped upon him and held him violently to the ground till he did not move anymore. Then they threw him in a police van and brought him to a police station. Only then they 'discovered”that something was very wrong with him. The next day, Mitch died.

The claim of the public prosecution's office that he only went sick while he already was in the police car was untrue, as the prosecution itself had to admit after videos came out showing that Mitch was clearly in a very bad shape during the arrest itself, before he was even pushed into the police vehicle. The claim that Mitch had said that he was armed – the justification for his violent arrest – is disputed by at least one witness of the events. Basically, Mitch was choked to death by five police agents holding him down.

On Wednesday the public prosecution 's office admitted that the 'probably cause' of his death was lack of oxygene caused by the police handling of him. They are on leave, but not arrested. In The Hague, you get killed when cops say you may have a gun. In The Hague you walk free, even if you are a murder suspect, as long as you are a police officer on duty when that crime was committed. Ofcourse, people thought of Ferguson and Baltimore.

The police violence of which Mitch was a victim has a clear racist dimension. Mitch was from Aruba, one of the remnants of the Dutch colonial empire, formerly part of the Dutch Antilles in the Caribbean. Antillians and Arubans form sizable communities in the Netherlands. They are generally very poor, and suffer from racist treatment by police, and racist abuse by politicians. When rightwingers get bored with blaming Muslims for all imaginable ills, they switch to targeting Antillians/Arubans, and back again. So when an Aruban man got killed by cops, people made connections. Nobody in her of his right mind believs that an white man would have been trteated as Mitch has been treated.

The fact that politicians on Aruba immediately raised their voice helped to generate publicity. Family members and activists started to spread the news and asking critical questions. The Hague police could not push the killing under the carpet. This was, after all, not the first time. People remember the killing of seventeen year old Rishi, a person of colour as well, by police bullets in December 2012. The killer cop went free.

READ THE FULL REPORT IN HERE .

Posted by Overseas Review at 5:03 AM No comments: