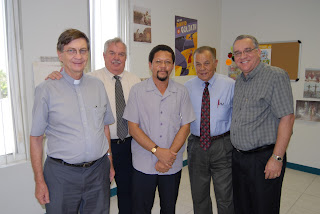 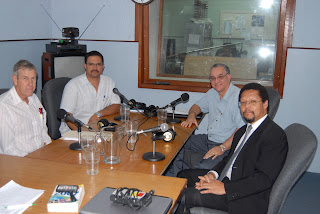 Pastor Al (2nd right) participates in radio interview on constitutional issues with (from left) Billy Adam and Dennie Warren, Jr. of People for Referendum, and Dr. Carlyle Corbin.
He served as co-chairman of the Chamber of Commerce working group on constitutional modernisation in the Cayman Islands and in this role, addressed the United Nations Select Committee of 24 on Decolonisation at the UN Headquarters in New York and also at a regional seminar in St. Vincent. In 2009, he travelled to London with a delegation to finalise Cayman’s new constitution, which was approved by voters later that year.
He was a recipient of the Certificate and Badge of Honour from the Cayman Islands government.
Pastor Al is preceded in death by his eldest son. He is survived by his wife Kathy and three children.
Posted by Overseas Review at 10:35 PM