BVI Thanks CARICOM For Assistance After Hurricanes 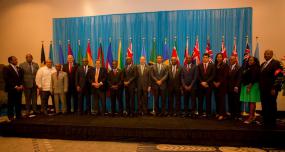 The Caribbean Community (CARICOM) has been commended for its immediate assistance to the Territory following the passage of hurricanes Irma and Maria.
Deputy Premier and Minister for Natural Resources and Labour, Dr. the Honourable Kedrick D. Pickering conveyed the Territory’s gratitude while addressing the 29th Intersessional Meeting of the Conference of CARICOM Heads of Government held in Port-au-Prince, Haiti from February 26 through 27.
Honourable Pickering said, “We would like to convey the heartfelt appreciation of the entire BVI community for the overwhelming support given to us from the CARICOM community in the immediate aftermath of the storms.”
He added, “The collective efforts from the Caribbean community have re-emphasised the wisdom of this family of nations as one Caribbean Community, and highlights the value of regional cooperation and integration movement.”
Honourable Pickering addressed the meeting on behalf of Premier, Dr. the Honourable D. Orlando Smith, OBE and expressed gratitude to OECS and CARICOM, particularly the Government of St. Lucia for accepting BVI prisoners and for temporarily hosting the Commercial Division of the Eastern Caribbean Supreme Court.
He thanked the Government of St. Vincent and the Grenadines for making arrangements to welcome BVI Secondary level students to ensure their education towards graduation would not be interrupted.
The entire Caribbean community through the Caribbean Electric Utility Services Corporation was recognised for their assistance in providing crews to assist in the restoration of the electricity distribution network, some of whom are still in the Territory.
Appreciation was also expressed to the Governments of Jamaica and Guyana who sent officials to support the coordination of evacuation and humanitarian relief efforts in the immediate aftermath of hurricane Irma.
“Indeed as the implications of the destruction wrought by the past hurricane season continues to grip us all, we stand in solidarity with all the people of the region who are currently at varying stages of rebuilding our lives,” the Deputy Premier said.
Honourable Pickering updated the conference on the Territory’s progress in its recovery and rebuilding efforts.
The leaders also reflected on the destruction suffered across the region by the 2017 hurricane season and the urgent need to augment preparations for the upcoming hurricane season.
The Caribbean Disaster Emergency Management Agency (CDEMA) presented the report of their activities in 2017 and updated the meeting on the forecast and preparation for the upcoming season.
Author
Bria Smith
Information Officer I
Department of Information and Public Relations (GIS)
Telephone: 468-2747
Email: BriaSmith@gov.vg

Posted by Overseas Review at 3:46 PM No comments: