When the U.S. Military Came to Guam

The island’s wildlife has been a casualty of the military presence.

Since North Korea threatened to fire missiles into the water around Guam, much has been made of the island’s strategic importance. It is the westernmost U.S. territory; it is home to two existing military bases—for the air force and the navy—and a planned third, for the marines.

The United States retook Guam from the Japanese in World War II, and the military has been an outsized and sometimes controversial presence on the island ever since.

These geopolitical circumstances have physically remade the island—a third of which is under U.S. military control. It has meant the dredging of wharves for the navy’s ships, the construction of housing for thousands of U.S. soldiers, and a planned live-fire range right next to the island’s national wildlife refuge.
And then there are the snakes. 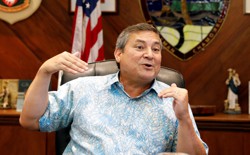 North Korea: The View From Guam
Sometime in the years right after WWII, as military planes were flying in and out of Guam, a species called the brown tree snake hitched a ride from the South Pacific. It grows several feet long and feeds on small mammals, lizards, and birds. On the island, this invasive predator found easy prey. It feasted on Micronesian kingfishers and Mariana fruit doves and rufous fantails; in just a few decades, it ate 10 out of 12 native forest-bird species off the face of the island.
“It’s a really eerie feeling to spend a day by yourself in the jungle on Guam,” a scientist told the BBC recently. There are no bird songs, no mating calls, no chattering.

Efforts to curb the snake population have become as extreme as dropping thousands of dead mice by airplane over the island. The mice are laced with acetaminophen—the active ingredient in Tylenol—which is poisonous to the snakes.
“The military development of Guam has taken out a lot of forest.”
The effects of the snake’s appetite have rippled through Guam’s ecosystem. Without birds to eat them, spiders have flourished. Without birds to spread seeds, forests have thinned. According to one estimate, the growth of new tree seedlings has declined between 61 to 92 percent.

All this has been compounded by the buildup of military bases on the island. “The military development of Guam has taken out a lot of forest,” says Susan Haig, a wildlife biologist at the U.S. Geological Survey.

The military is uniquely exempt from “critical habitat” provisions in the Endangered Species Act, thanks to an amendment that Congress passed in 2004. Critical habitats are areas deemed crucial to an endangered or threatened species, and it’s harder to develop on those lands. Instead of going through the same process as everyone else when building on critical habitat, the military can work out an integrated natural-resources management plan with the U.S. Fish and Wildlife Service. In 2004, the Los Angeles Times reported, “The agency initially proposed designating 24,803 acres of Guam's forests as critical habitat for the birds. After Congress gave the military the exemption from critical habitat, the agency slashed its proposal to 376 acres.”
The plan to relocate a marine base from Okinawa to Guam will mean more habitat disruption. New housing for thousands of marines and their families will impact hundreds of acres of recovery habitat for birds and the endangered Mariana fruit bat. And a proposed live-fire training range will affect dozens to hundreds of acres.

The buildup on Guam has consequences for other islands nearby, too. The military has proposed conducting war games on Tinian and Pågan, two islands north of Guam that belong to the U.S. Commonwealth of the Northern Mariana Islands. Pagan would become a bombing range and coral reefs around Tinian practice grounds for amphibious vehicles. “[The islands] have extremely rich biological diversity, and the increase of military activity on these islands is just going to pummel all of that,” says Miyoko Sakashita, senior counsel for the Center for Biological Diversity. The center, along with several local groups, has filed a lawsuit against the military challenging this plan.

These remote islands will be key to the U.S. military’s readiness if there is trouble in Asia. But the environmental cost of projecting U.S. military power across the Pacific also falls disproportionately on them. Their wildlife has been a casualty of geopolitics. With Guam now the focus of North Korea’s threats, Gordon Rodda, a retired biologist with the U.S. Geological Survey who has worked on the island, closed out an email to me this way: “I do understand that nuclear exchanges would not be good for Guam’s wildlife!”

16. Requests the Secretary-General to report on the environmental impact of the military activities of the administering Power in the Territory;

Posted by Overseas Review at 1:04 PM No comments: