The EconomistVotes loom on the future of New Caledonia and BougainvilleThe first Pacific island may choose to stay part of France, but the second could split from Papua New Guinea.

IT HAS been six years since the birth of the world’s youngest country, South Sudan, in 2011. It may soon have some younger siblings. The Pacific island of New Caledonia is due to hold a referendum on independence from France by November next year; Bougainville, 1,200 miles to the north (see map), is supposed to vote on separation from Papua New Guinea in 2019.

The timing of the two referendums was fixed decades ago, to defuse long-festering conflicts. But the approach of the appointed time is raising tricky questions about how to word the question on the ballot, who should have the right to vote and what to do once the results are in. 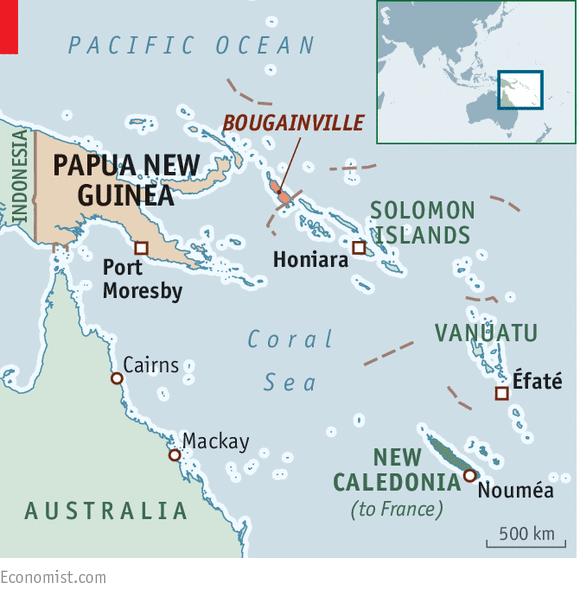 New Caledonia’s secessionist uprising ended in 1988 when leaders of the indigenous Kanaks and French loyalist politicians agreed to hold a vote on independence a decade later. When that deadline arrived, the two sides approved a further delay of 15-20 years. They also agreed to share power in the local government and to try to bring about an economic ré-équilibrage (rebalancing) to lift predominantly Kanak regions.

New Caledonia has a population of 269,000. Kanaks account for 39%; Europeans for 27%; other Pacific or Asian ethnicities and people of mixed race make up the remainder. Most Kanaks are thought to lean towards independence; most Europeans, towards the status quo. The electoral roll for the referendum will not include those who arrived in the territory after 1998. That excludes many of the European métros who come and go from mainland France on short-term contracts.

Even so, French nationalists such as Marine Le Pen, a leading contender in France’s presidential election, are keen for a quick vote and a straightforward question, in expectation of an emphatic defeat for the independence movement, which has never won a majority in elections for the local parliament. But some loyalist politicians, such as Pierre Frogier, a former “president” of the local government, would prefer a new accord deferring a vote again, for fear that Kanaks might resort to violence in the event of a “no”. Unrest in St Louis, a largely Kanak suburb to the east of the capital, Nouméa, has served to heighten those fears, and led to a bolstering of the police force in November.

Bougainville’s population is similar in size to New Caledonia’s, but far poorer. The separatist war that ran from 1988 to 1997 claimed about 5,000 lives and led to the closure of a big copper mine run by Rio Tinto, an international mining group. A peace agreement in 2001 established an Autonomous Bougainville Government (ABG) and included a provision for a referendum to “include a choice of separate independence” by 2020. Some rebels spurned the peace talks, however, and held on to their guns.

Papua New Guinea’s prime minister, Peter O’Neill, is adamant that he will not allow Bougainville to break away, and insists that the referendum will be non-binding. Yet in January his government collaborated with the ABG to set up a Bougainville Referendum Commission. Both sides have also agreed to hold the vote in June 2019.

The ABG had been counting on reopening the closed copper mine to fund its future state, but Rio Tinto demurred last year. Other investors are wary, too, fearing renewed conflict. Without the mine, the ABG is reliant on the central government for the bulk of its revenue. But Papua New Guinea is facing a fiscal crisis and, despite the impending ballot, has trimmed spending on Bougainville. If, as expected, Bougainvilleans vote for independence, the island’s future is unlikely to be prosperous.

Peace agreements that depend on delayed referendums enable both sides to imagine the future of their dreams, but only by putting off the day of reckoning.

When that comes, as both Bougainville and New Caledonia are discovering, the advantages of an ambiguous status quo may seem greatly preferable to the dangers of a clear decision. (REALLY?)

Posted by Overseas Review at 10:01 PM No comments: