SESSION REMARKS BY VICE SPEAKER TERLAJE OBJECTING TO RESOLUTION NO. 27-34 "TO RECOGNIZE THE 'WE THE PEOPLE' PROJECT FOR ADVANCING VOTING RIGHTS FOR THE PEOPLE OF GUAM AND OTHER TERRITORIES"

"It should be of grave concern to us, in Guam, that the 'We the People Project' brought this lawsuit (on American Samoa) against the wishes of the American Samoa government and many of the people themselves."

It is irrefutable that Veterans of Guam who served the U.S. Military deserve the respect and attention of the United States government. It is commendable that lawyers from Guam recognize these disparities and step up and help our veterans. There are many other concrete ways that we lawyers and non-lawyers can assist veterans. For example, we have Vietnam Veterans who still are not receiving Agent Orange disability benefits because of the discouraging paperwork and process they must go through.

Their service in Vietnam entitles those are diagnosed with cancer, diabetes, or other illnesses to a presumption of exposure to Agent Orange an entitlement to medical, disability, survivor, and other benefits and compensation. Yet the lengthy, complicated, discouraging claims process discourages them. And we attorneys and non-attorneys should work together to help these veterans gain this immediate and concrete relief; and these winnable claims.

It is also equally irrefutable that the citizens of Guam are being treated unequally by the United States and face many serious injustices that require immediate action, most notably the impending live fire range being built at Northwest Field that threatens our ancient village, critical habitat, endangered species, and causes permanent injury to land that should be returned to original landowners. Voting rights as proposed in this Resolution does not give us adequate tools to protect our homelands. The people of Guam and other territories deserve to determine for themselves their governance and political status.

While the resolution at first glance appears commendatory, it is being treated as a substantive resolution, and indeed, it may be interpreted by third parties as a substantive endorsement of the underlying merits or arguments of the case. In short, the resolution may have unintended consequences for the people and government of Guam, including possibly the government’s ability to intervene in the case should intervention become necessary at some stage of litigation. The government of Guam’s position in the underlying case has not yet been fully vetted, and may be controlled by current policy as contained in statute, which mandates that the government pursue decolonization and a plebiscite pursuant to UN directives. The Segovia case has the potential to impose on Guam a vote for president without a corresponding vote of the people to enter into one of three internationally recognized political statuses, as a state fully incorporated into the United States, as a state in free association with the United States, or an independent country.

Thus, the case may have broader legal consequence inasmuch as it may upset a political process that ensures self-determination for the people of Guam. A right this important – if it is to be given up – must be thoroughly considered and consciously surrendered. We should not allow it to be impliedly conceded through the adoption of a commendatory resolution.

The United States District Court for the District of Columbia dismissed the case, and the Court of Appeals affirmed the dismissal in favor of the government of American Samoa. The case was appealed to the Supreme Court of the United States in February 2016. And in June, the Supreme Court denied certiorari, upholding the decision in favor of American Samoa. It should be of grave concern to us, in Guam, that the We the People Project brought this lawsuit against the wishes of the American Samoa government and many of the people themselves.

At the public hearing on this resolution, there were no witnesses to testify. The President and Founder of We the People Project, as said earlier, submitted written testimony on this measure. And there was some discussion about this underlying case affecting American Samoa. The digest from the public hearing indicates, and I quote, page 3 of the digest, “Chairman San Nicolas thanked Vice Speaker for her statements and echoed her statements on the American Samoa state government not supporting the original case. Chairman San Nicolas indicated it is because of that reason that I Liheslaturan should chime in on the issue, one way or the other, considering that the only voice being heard now at the federal level is that of a particular state government not supporting the case, and in turn that can be extrapolated as to whether or not the other U.S. territories support the case. Chairman San Nicolas indicated that the time is now to decide on the issue, and that the Resolution can help that cause.”

I would like to read a short quote from the U.S. Court of Appeals, when they ruled in favor of American Samoa. And I quote “We can envision little that is more anomalous under modern standards than the forcible imposition of citizenship against the majoritarian will. To hold the contrary would be to mandate an irregular intrusion into the autonomy of the Samoan democratic decision-making. An exercise of paternalism if not overt cultural imperialism offensive to the shared democratic tradition of the United States and modern American Samoa. For the foregoing reasons the district court is affirmed.”

In the citations of the last paragraph, they cite the United Nations charter. They cite excerpts from the Atlantic Charter, US and UK, August 1941, endorsing respect for the right of all peoples to choose which government in which they want to live. They cite Woodrow Wilson’s 14 points address to joint session of Congress in determining all questions of sovereignty, the interest of the population’s concern must have equal weight of the equitable claims of government; who’s title is to be determined. The underlying decision in the same case where the court said, “American Samoans take pride in their unique cultural and political practices and they celebrate its history free from conquest or involuntary annexation from foreign powers.”

The plaintiffs in this action are six United States citizens who are former residents of Illinois and who now reside in Puerto Rico, Guam or the U.S. Virgin Islands, plus two organizations that promote voting rights in United States Territories. The plaintiffs challenge the constitutionality of the Uniformed and Overseas Citizens Absentee Voting Act contending that it violates their equal protection and due process rights by barring them from casting absentee ballots in Illinois for federal elections due to their residence in the United States Territories of Puerto Rico, Guam, or the U.S. Virgin Islands, while allowing United States citizens who were previously qualified to vote in Illinois and currently reside in the United States Territory of the Northern Mariana Islands or in a foreign country to cast absentee Illinois ballots.

The court ruled against the We the People project in both of their motions for summary judgment and when talking about the right to interstate travel: “neither the UOCAVA nor Illinois MOVE infringe upon the plaintiffs’ right to leave Illinois and travel to a U.S. territory. They are free to come and go as they please, although their decisions to relocate to Puerto Rico, Guam or the USVI have come at a cost. They moved outside of the State of Illinois and became residents of U.S. territories “in a constitutional scheme that allocates the right to appoint electors to States but not territories.” By moving to their respective territories, the plaintiffs gained the rights and privileges of citizens of their new residence. Their loss of the right to vote in federal elections was not caused by the UCOAVA or Illinois MOVE, but by their own decision to relocate.”

Guam has similar state interests as Illinois, and we have experienced challenges to our voting laws that we here at the Legislature have passed. We saw one recently in the Davis case that may seriously impact Guam’s decision to proceed with a plebiscite. As a member of the Guam Legislature, I object to Guam’s Legislature interfering with Illinois voting, I mean if the individual plaintiffs are successful then more power to them but as the Guam Legislature, I do not think it is our place. I do not want other states to come here and tell us that their residents should be voting in our elections, contrary to our laws. I do not want other countries to tell Guam or other territories who should be voting under our election statues. I just think that it is we, the people of Guam, who should decide our status. We must decide if voting rights, voting for president, if we took all the people of Guam or even all the Chamorros on Guam and in the States, put them all together and gave them this right to vote, does that help us?

That’s what we really need to decide before we move on to any kind of endorsement for that type of a voting right because it looks to me like that type of voting right will not help us in our pursuit for control over our lands or any type of control to stop live fire training and testing in our waters. That’s not what we get with this type of voting rights and the people of Guam have spoken about this. At the very least, it demands that more input be made. This is one of those things that the Guam legislature sends Congress, or United Nations, and United States advocates in the United Nations against Guam, saying that they’ve already decided the issue. They do not need the plebiscite. But I just think we do not need by purpose or accident, to give them any other ammunition that could be used against us.

We have to be very careful; we have had the benefit of learning from other countries that have made their choices in political status. We’ve seen the mistakes sometimes they made; how overbearing the United States is in that process and I think that we just need to protect ourselves from everything possible. And keep ourselves focused on what we have already decided to be our mission. So I ask my colleagues, at the very least, set this on for more hearings or to vote this down. I thank you very much.

Posted by Overseas Review at 10:24 PM No comments: 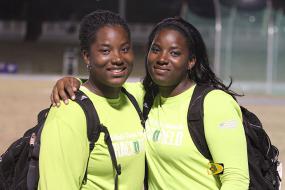 Ms. Huggins is a freshman at Iowa Central State and became the first female Virgin Islander to win an individual title at the collegiate level in the United States of America. She won the 60 meters dash with a time of 7.31 seconds.

Tynelle Gumbs became the 2017 D2 National Indoor Champion in the Weight Throw with a winning throw of 21.41 metres. She attends the University of Findlay along with her twin sister, Trevia Gumbs, who also competed and placed ninth in the event with a throw of 18.80 meters.

Minister for Education and Culture, Honourable Myron V. Walwyn extended congratulations to the athletes and wished them continued academic and athletic success. The Minister also congratulated their parents and coaches including Winston Potter and Coach Omary Jones of the Top Notch Track School for laying the foundation upon which they continue to build.

The Ministry of Education and Culture continues to support Virgin Islands’ athletes and young persons by ensuring that the Territory’s youth excel and create a culture of excellence for themselves, and by extension, the Virgin Islands.