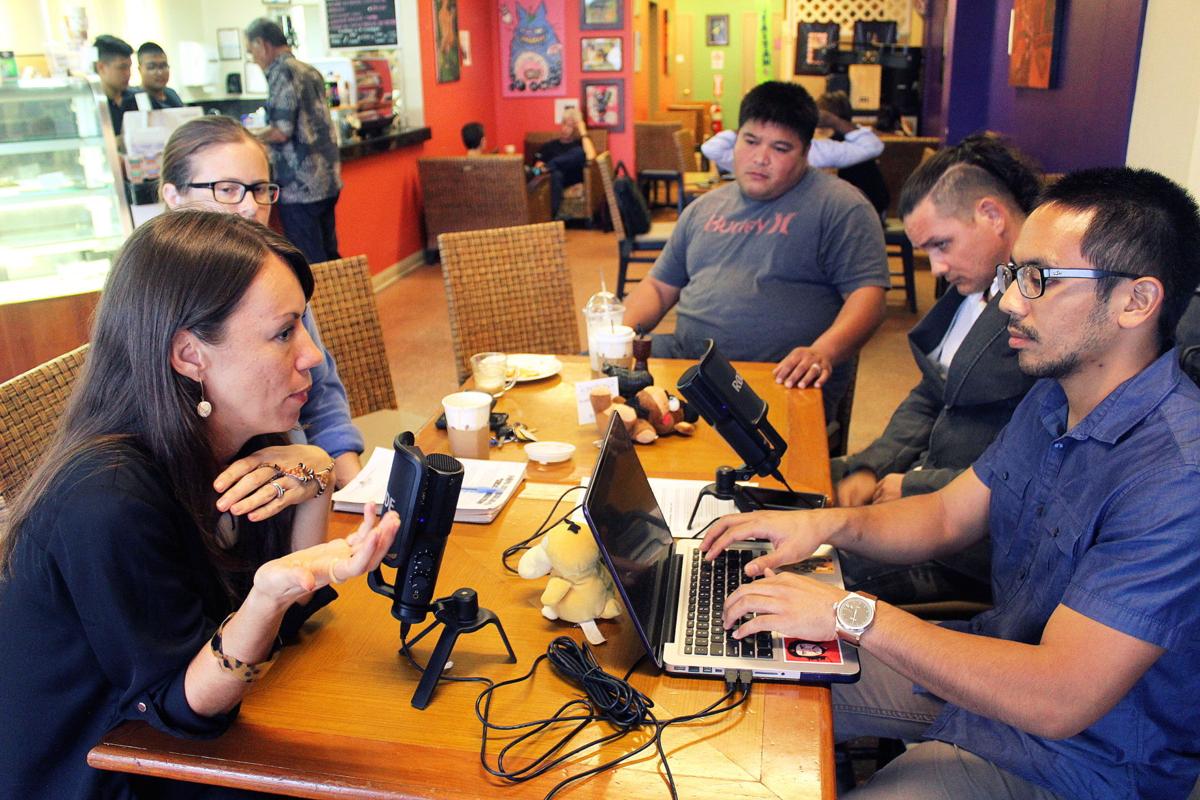 A new podcast series put on by the Independence for Guam Task Force (Independent Guåhan) began earlier this month with the goal of educating listeners from the Guam community and beyond on issues relating to decolonization.
Titled “Fanachu!,” which translates to “stand tall” in Chamorro, the weekly podcasts will feature casual conversations and interviews with a variety of individuals who are either decolonization experts, have a hand in Guam’s three task forces, or who simply contribute to the movement in their profession.
“Fanachu!” is produced by the Independent Guåhan Media Committee, headed by Dr. Michael Lujan Bevacqua, and is spearheaded by Manny Cruz and Independent Guåhan partners Becca Garrison, Jesse Chargualaf, and Ed Leon Guerrero. The series host is Manny Cruz, a former reporter who had a short stint on radio and is pursuing a Master’s degree in English. Even as a volunteer host, he provides the audio equipment and guides the flow of the show, posing insightful questions on decolonization to featured guests.
Starting discussions
The inaugural episode was recorded at Java Junction in Hagåtña as part of their “Coffee Shop Convo” sessions, featuring Independent Guåhan members Dr. Bevaqcua and Victoria Leon Guerrero, and Free Association Task Force Chair Adrian Cruz.
At a glance, this first conversation covered topics including anti-American outlooks in pushing for independence, similarities between Guam and an independence push in Scotland, and the role of the United Nations in the process of decolonization.
Their second podcast focused on the connection of Guam’s struggle to that of the highly contested Dakota Access Pipeline and explored ways to see Guam’s decolonization as a normal part of history.
Their third podcast featured Jason Datuin of DFRNT, to talk about how, according to Cruz, colonization’s affects can be found in virtually very aspect of our daily lives, including food.
Their fourth podcast in the ongoing series, scheduled to be released this week, features Moneka Flores and Melvin Won Pat-Borja, members of Independent Guåhan topics. They discuss the role of media companies in sometimes distorting decolonization efforts and, as they argue, creating an unbalanced picture of the status options, namely independence.
Progressive ideas
A grassroots operation, the task force decided to engage the public through podcasts as their medium of education due to their constraints on funding. But Cruz says that through the democratization of media, having his own microphones, a laptop, and an internet connection, he had all he needed to be able to publish engaging content with ease and at minimal expense.
"Podcasting just seemed like a great way to include the world in the conversations taking place locally," Cruz said. "There’s always a lot of great, progressive ideas floating around at our different meetings. But not everyone can be there all the time, so it just made sense to capture it in a way that's convenient for practically anyone."
The young graduate student and journalist took it upon himself to use the minimal equipment he had to contribute to the task force and to the decolonization conversation by producing the show. Cruz conducts the interviews, edits the recordings, and promotes the shows through social media.
“My interest in activism on Guam goes back a long way,” Cruz said. “This is my way of contributing with a skill that I have.”
Fighting colonization
The larger goal of Independent Guåhan, and Cruz's personal goal, is to contribute toward educating a community on a topic that is both far-reaching and frightening to some.
“There’s a huge barrier in us trying to communicate to the public, to people who don’t think about decolonization on a day-to-day basis,” Cruz said. “Most people are like ‘why should I care’ or ‘I like what I have.’ Breaking through the status quo is what is challenging for all of the task forces; getting over the idea that decolonization isn’t crazy, and it’s not scary. This is a common obstacle between the status options, so we try to figure out ways, like podcasting, to get through to people.”
Cruz said the common goal between the three task forces representing the three status options of Free Association, Statehood, and Independence, is to move the island toward a decolonized Guam, with more power over its own resources, people, and political destiny.
“At the end of the day the common obstacle is colonization, and what we’re fighting for is sovereignty,” Cruz said. “Thanks to the educative efforts of some people, there’s a shift in consciousness and way of thinking about decolonization."

Posted by Overseas Review at 8:40 PM No comments: