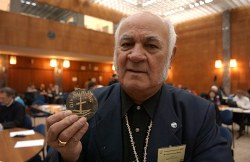 GENEVA, Dec. 28, 2016 /Christian Newswire/ -- John Doom lived in a small place on the planet, but he was committed to big things through his faith, fighting to stem atomic testing in the fragile ecosystem of his homeland French Polynesia.

"Papa John's passionate commitment and dedication to the ecumenical movement and our Lord's call to unity was and continues to be a source of inspiration for the many blessed enough to have known him and to work with him," wrote the World Council of Churches' general secretary, Rev. Dr Olav Fykse Tveit.

The general secretary sent a letter on 28 December to the Maòhi Protestant Church after Mr John Doom passed away, aged 80, on Christmas Day, in Papeari, Tahiti.

The fifth sibling of 12 children, John Taroanui Doom was born on 6 May 1936, in Papeete, French Polynesia.

Doom became a deacon of the Maòhi Protestant Church (French Polynesia) in 1962.

From 1971 to 1988, he served as general secretary of his church. Between 1972 and 1977, he also served as principal of the Hermon Theological School, Tahiti. He was a member of the executive committee of the Pacific Conference of Churches from 1966 to 1989.

In 1989, he was appointed as the WCC's executive secretary for the Pacific region, a position he held until his retirement in 2000.

In his letter, Tveit praised Doom's leadership and vision, stressing that his "life and witness as a faithful disciple of Jesus truly exemplify one who lived in assured hope and in readiness for Christ's coming in his daily walk by faith."

A committed citizen, John Doom was also the co-founder and coordinator of the Nuclear Workers' Association in French Polynesia, Mururoa e Tatou.

Being an eye witness of the first French atomic test in the Pacific, in 1966, he was also known for his strong commitment to anti-nuclear advocacy campaigns.

In the early 1980s, the Evangelical Church in Polynesia officially denounced French atomic tests at Moruroa and Fangataufa, encouraged by the Pacific Conference of Churches, which also firmly opposed the American nuclear tests in Marshall and Kiribati.

When the atomic tests in the region were resumed, in 1995, Doom sent 80,000 postcards of protest to the French government from the Pacific office of the WCC. In 2001, he took part in the founding of the association of victims Moruroa e tatou in Papeete.

In his condolence letter, the WCC general secretary shared his testimony on Doom's crucial role to raise awareness in the world "to address the enormous damage for his peoples and region after the nuclear testing going on in the Pacific."

Tveit's letter ends with words of support to Doom's family and the churches in the Pacific.

"We stand with you in your sorrow and give thanks for a man whose spirit encouraged unity in our faith and participation in God's mission," he wrote.

Doom's funeral service took place on 27 December, in the cemetery of Papeari, where he was buried next to his wife Tetua Tau, who died five years earlier.

Posted by Overseas Review at 11:27 PM No comments: