“In the case of Clinton, she supported the same politics that have been practiced up until now. In a sense, I expected that the current deadlock would simply persist.” - Okinawa Governor Takeshi Onaga 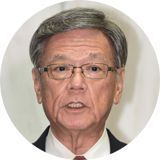 Governor Takeshi Onaga
Ryukyu Shimpo
Reporters have learned that on November 9, Governor Takeshi Onaga sent a message of congratulations to U.S. president-elect Donald Trump. It is the first time a governor has sent a message of congratulations to a winning candidate in a U.S. presidential election.
Regarding the outcome of the U.S. presidential election, the Okinawa prefectural government was of the perspective that had Hillary Clinton, who promoted the Henoko relocation as Secretary of State, been elected, no significant change could be expected. Regarding the impact of Trump’s inauguration as president, a prefectural official expressed caution, saying that there are many unknowns, but added that “there is expectation that something will happen,” expressing an intention to reach out to Trump and those around him to try to find a resolution through direct dialogue.
Regarding the impact that the outcome of the U.S. presidential election will have on the Henoko relocation, Governor Onaga explained, “In the case of Clinton, she supported the same politics that have been practiced up until now. In a sense, I expected that the current deadlock would simply persist.” He added, “In the case of Trump, his win is unprecedented. I don’t know how the base issue will be impacted, but I doubt Trump will practice a politics of deadlock. I will express my perspective [to Trump] as soon as possible.”
According to prefectural officials, the congratulatory message was not a suggestion from administrators but an order from the governor himself. The message congratulated Trump on his victory, conveyed wishes for progress in the United States, and expressed a desire for an opportunity to talk about the relationship between the United States and Okinawa after Trump’s inauguration. An initial draft of the message referred to the Henoko new base construction and other base issues, but from the perspective of beginning with dialogue, specific issues were not touched on in the final version.
(English translation by T&CT and Sandi Aritza)
Posted by Overseas Review at 10:50 AM No comments: