Opinion: U.S. Confirms In A Document That Curaçao Will Be Used In A Possible Military Intervention Against Venezuela

U.S. Southern Command, confirms that what is happening in Venezuela is directed and coordinated from Washington. In a document called Venezuela Freedom – 2 Operation –Phase preceding – South Command reveals its strategy and its connection with the Venezuelan extreme right the “MUD”.


In this document the Southern Command makes a series of 12 recommendations and it exposes a mechanism to use parliament as a weapon to boycott Maduro’s government; continue to create food shortages and basic products (economic pressure); use psychological pressure, financially and legally; use international support and execute violence in a selective way. Southern Command indicate that in July or August 2016 they can stage a coup against Maduro.
What is more worrying is the fact that in there recommendation number 12 they mention the possible use of military intervention and they military bases in Aruba and Curaçao will be used for any possible attacks. 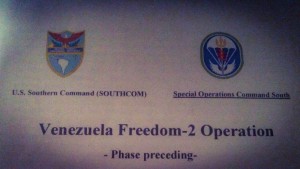 This document is the imperial script to oust a legitimate government; it’s a plan to stage a coup; it’s a war plan and it connects us as a possible accomplice in an attack against the Bolivarian nation and Hugo Chavez.


It’s almost comical to think that the Dutch government does not know about these plans. This means that our people will be involved in a bloody war with Holland as accomplice. Our people will be used against it’s Latin American brothers.
Our people need to protest and demand from the government Whitemann to stop this madness. We have to get up and demand not to be involved in a possible war against Venezuela. They can’t use our territory that belongs to our people to start a war against our neighbor. The damage to our people is irreparable.
This is not possible!
By Carlos Monk


Former Minister of Government Services
Posted by Overseas Review at 9:23 AM No comments: