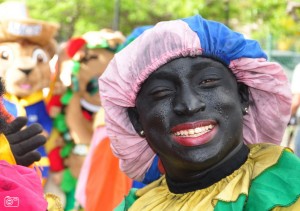 WILLEMSTAD – Upon the arrival of Sinterklaas in Curaçao next Saturday Museo Tula (Tula Museum) will protest against this, what they call, racist tradition. This was announced by Stanley Quirindongo on behalf of the museum.


“We need to come up with a new tradition. We are not giving value to our color with the Black Pete. It doesn’t even matter if they paint their faces all kinds of other colors. Let’s stop with this tradition,” said Quirindongo.
Museo Tula points out that the human history and civilization have begun in Africa. Despite the humiliating century of slavery, our forefathers have always ensured that there is mutual concern and cooperation between the people. “Still our youth don’t even know about their African roots.”
In this ‘atmosphere of ignorance’ we celebrate every year Sinterklaas. “The white man on the horse who looks down on his helpers. This black man is stupid and a clown, he can only do strange things.”
It is a Dutch children’s tradition. Quirindongo says that it is full of humiliating elements and it is also a racist tradition.


And The War For Black Pete Continues

Posted by Overseas Review at 9:55 PM No comments:

Okinawa delegation in Washington to Challenge Construction of U.S. Marine Air Base Runway

By Ann Wright
A 26 person delegation from the All Okinawa Council will be in Washington, DCNovember 19 and 20 to ask members of the U.S. Congress to use their power to stop the construction of runway for the U.S. Marine base at Henoko into the pristine waters of the South China Sea.
The delegation is concerned about the environmental impact of the new facilities, including a runway to be built into the coral areas and natural habitat of the marine mammal, the dugong and the continued militarization of their island. Over 90% of all U.S. military bases in Japan are located in Okinawa.
The Henoko construction plan faces substantial opposition from the people of Okinawa.  Protests of 35,000 citizens, Including many senior citizens, against the construction of the base have rocked the island.
The issue of the Henoko relocation plan has taken a critical turn. On October 13th, 2015, Okinawa’s new Governor Takshi Onaga revoked the land reclamation approval for the Henoko base construction, which was granted by the previous governor in December 2013.
The All Okinawa Council is a civil society organization, consisting of members of civil society organizations/groups, local assemblies, local communities, and business establishments.
Members of the delegation will have meetings with several Congresspersons and staffers on November 19 and 20 and will hold a briefing in the U.S. House of Representatives in Rayburn building room 2226 at 3pm on Thursday, November 19. The briefing is open to the public.
At 6pm on Thursday, November 19, the delegation will host a showing of the documentary “Okinawa: The Afterburn” at the Brookland Busboys and Poets, 625 Monroe St., NE, Washington, DC 20017.
The film is a comprehensive picture of the 1945 Battle of Okinawa and the 70-year occupation of the island by the US military.
On Friday, November 20, the delegation will hold a rally at the White House at noon and asks for support from local organizations opposed to expansion of U.S. military bases around the world.
The Henoko base construction in Okinawa would be the second base in Asia and the Pacific to be used by US military that has faced enormous citizen outrage as both bases will destroy environmentally sensitive areas and increase the militarization of their countries.  The construction of the South Korean naval base on Jeju Island that will homeport ships carrying the US Aegis missiles has caused massive citizen protests.
About the Author:  Ann Wright served 29 years in the US Army/Army Reserves and retired as a Colonel.  She was a US diplomat for 16 years and resigned in 2003 in opposition to the Iraq war.  She has travelled to both Okinawa and Jeju Island to speak on U.S. military bases and sexual assault by US military members on women in the local communities.

Posted by Overseas Review at 12:34 AM No comments: