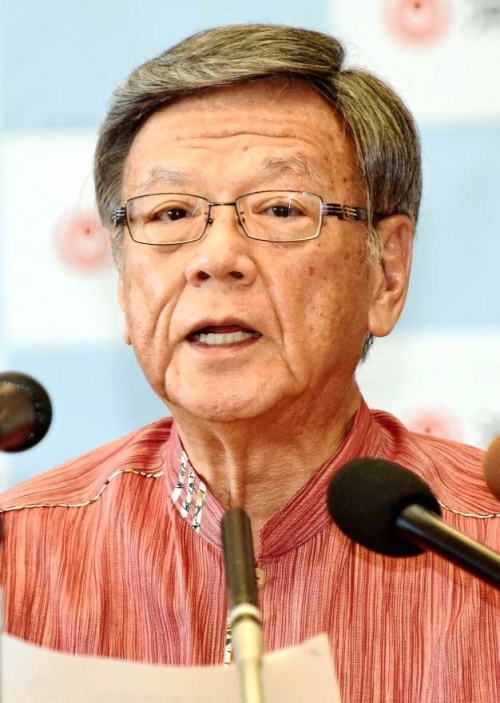 Okinawa Governor Takeshi Onaga announced that he had sent a document rejecting the national government's recommendation that he repeal his revocation of Henoko landfill at 10:30 a.m. on November 6 at the prefectural government building.Ryukyu Shimpo
Okinawa Governor Takeshi Onaga sent a document to the Minister of Land, Infrastructure, Transport and Tourism Keiichi Ishii, conveying his rejection of the national government’s recommendation that he retract his revocation of the landfill permit for a new military base in Henoko, Nago. The governments of Japan and the United States plan to relocate the U.S. Marine Corp Air Station in Ginowan to Camp Schwab in Henoko, including building a runway on reclaimed land on Oura Bay.
Governor Onaga said at a news conference held on the same day, “I cannot follow the recommendation by the national government. I believe the revocation is legal.”
The land minister is likely to bring the case to the high court at the end of this month alleging the governor’s decision to revoke the landfill is illegal based on a subrogation clause in the Local Government Act.
The prefectural government sent an open letter to the land minister on November 6 asking five questions regarding what it claimed were inconsistent decisions made by him. The questions include: “Why did the land minister identify the defense ministry’s Okinawa bureau as a private individual entity when the bureau filed an appeal against the decision made by the governor, while the minister referred to the bureau as an administrative agency in a subrogation proceeding?” The prefectural government has requested a response from the land ministry to the questions to be provided by November 13.
It is unusual for a prefectural government to send an open letter to a national government minister in Japan.
The prefectural government’s lawyers revealed at the news conference that the governor will outline his argument in a verbal testimony to be given at the high court next week.
The governor said, “The director of the Okinawa Defense Bureau and the land minister are selectively using their titles according to their convenience. The national government has installed many riot police officers from Tokyo Metropolitan Police Department at Henoko. They are trying to force the relocation project by their bare knuckles.
The government should not just say perfunctory words but perform its duty and give clear explanations to citizens.”
Regarding a recent controversy involving an environmental oversight panel set up by the defense bureau receiving donations from contractors involved in the Henoko relocation project, the governor said, “It has deepened the suspicion of citizens over the project.”
(English translation by T&CT)
Go to Japanese
Posted by Overseas Review at 10:34 AM No comments: