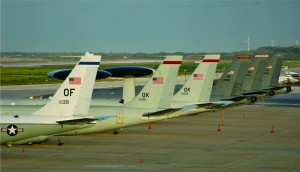 WILLEMSTAD, WASHINGTON – A spokesman for the U.S. Consulate in Curaçao confirms that on Friday, November 6 an aircraft of the Forward Operation Location (FOL) stationed on the island violated the Venezuelan airspace.

“An aircraft dash-8 inadvertently flew into Venezuelan airspace on a counter-drug mission, which is the only mission the FOL has. This has happened because of a navigation error,” said the spokesman.

The Venezuelan Minister of Defense, Vladimir Padrino said that during a 30-minute period the plane twice entered Venezuelan airspace over the tiny archipelago of Los Monjes on Friday while performing what appeared to be a reconnaissance mission in the Gulf of Venezuela, which is also bounded by Colombia.

The incident was reported by Caracas but was denied by the Americans in the first instance.

Posted by Overseas Review at 11:57 PM No comments:


"The use of Curacao for such incursions of Venezuelan airspace, ostensibly to counter drug trafficking from South America, is seen by many observers as a means to harass the Maduro Government in Caracas. Such foreign military activity, allowed by the Dutch which receives financial compensation, appears to exceed the powers of the Dutch Government in the defence of autonomous Curacao. Whose defence issue is it anyhow?" - a Latin American expert

Caracas, (venezuelanalysis.com) - The Venezuelan government has accused the United States of violating its airspace after a US intelligence plane is alleged to have flown over northern Venezuelan territory this past Friday.


According to declarations made by Venezuelan Defence Minister Vladimir Padrino Lopez on Sunday, the plane’s pilots failed to notify Venezuelan aeronautical authorities of their presence or intended trajectory.

The Dash-8 bombardier plane is reported to have taken off at the Hato airbase in the nearby Caribbean island of Curacao before circulating in Venezuelan airspace just off Los Monjes islands.

“Forty-eight hours ago, an intelligence plane of the United States coastguard made an incursion into our region of flight information,” stated Lopez.

“It made a surveillance sweep, it circulated south of Los Monjes in the gulf of Venezuela. At 12.35 it carried out circular search flight manoeuvres, and continued South… leaving our region of detection and our contact radar,” he continued.

While the Dash 8 is principally designed as a small commercial airplane, it can also be adapted for intelligence uses. In April 2015, the US army announced that it would purchase six modified versions of the jet, specifically the “Saturn Arch” and “Desert Owl” models.

The jets can be equipped with foliage and ground penetrating radar, digital mapping and high resolution infrared imaging. They are mainly used for surveillance, intelligence collection and the detection of threats.

“This jet was equipped with a multi-use radar for maritime surveillance, a receptor and transmission system with a signal processor and an electro-optic thermal energy detector for the creation of images,” said Lopez.

In other comments, the minister also confirmed that another US intelligence plane, model RC-135, had come “unusually” close to Venezuelan airspace after departing from Nebraska.

According to the military chief, the Venezuelan armed forces will be particularly “alert” during the upcoming parliamentary elections on December 6th, when he expects increased US aircraft presence near to Venezuela.

“Without wanting to cause alarm, the aircraft carrier which left California a few days ago and which has navigated the waters of the Panama Pacific headed towards the south, coincidentally that aircraft carrier, which is accompanied by a combat fleet, will be very near to Venezuelan coasts on the day of the parliamentary elections,” stated Lopez.

It is not the first time that a US aircraft has been accused of intruding onto Venezuelan territory. In May 2009, then Venezuelan president Hugo Chavez reported that a US warplane had violated Venezuelan airspace after taking off from Curacao.

The report fuelled rumours that the US was planning an aggression against Venezuela from the Dutch Antilles.

Friday’s intrusion was publicly condemned by Venezuelan President Nicolas Maduro this weekend, who confirmed that his government will lodge an official complaint over the incident with international organisations such as the United Nations and the CELAC (the Community of Latin American and Caribbean States).

He went on to describe the event as the latest in a string of “provocations” from the US, which is a longtime opponent of Venezuela’s leftwing government.

Earlier in 2015, the Barack Obama administration used a presidential decree to officially designate the country as an “unusual and extraordinary threat to US national security”.

“The entire country should be united around rejecting these unusual and extraordinary threats from the US,” retaliated Maduro.

The Venezuelan president is due to speak at a meeting of the UN Human Rights Council this coming Thursday.

Posted by Overseas Review at 10:57 AM No comments: