On behalf of the Group “Union Pour La Démocratie” (U.P.L.D.), I wish to express our appreciation to the Special Committee of Decolonization for the adoption last June of recommendations on French Polynesia presently before this Committee.

We maintain our consistent commitment to the role of the U.N. in the decolonization of our territory pursuant to international law. We once again urge the administering power, France, to comply with its obligations under Article 73(e) of the U.N. Charter to transmit information, and under Article 73 (b) to develop genuine self-government with political equality. In this regards, it is regrettable that the administering power - in particular, a member of the Council of Security - continues to ignore its U.N. Charter obligations.

We solemnly recall the provision 3 of the UN resolution 1514 (XV): « (…) Inadequacy of political, economic, social or educational preparedness should never serve as a pretext for delaying independence.

From our perspective, decolonization is fundamentally about justice. But justice delayed, is justice denied. The existent political status quo, which finds the administering power exercising control of the main governance functions, denies us the fundamental right to an equitable and genuine self-determination process, and is reflective of a false autonomy.

The General Assembly has adopted a host of resolutions confirming that the ownership, control and permanent sovereignty of natural resources, including marine resources, lies with the peoples of the non self-governing territories as part of their heritage. U.N. resolutions have also affirmed that the exploitation and plundering of these resources by foreign economic interests is in violation of relevant U.N. resolutions, and is a threat to the territories' integrity and prosperity.

Mr. Chairman, Our administering power continues to unilaterally usurp the marine resources of the people of French Polynesia contained in the 5 millions square kilometers of Economic Exclusive Zone of deep ocean. These resources include the vast array of “strategic metals” such as rare earths, manganese, cobalt, and more. This deprives the people of French Polynesia of the means to build a sustainable economic and social future, and to move away from the profound economic dependency created by the false economy based on the legacy of the French nuclear testings.

Further economic exploitation occurs by other means. Since 2009, revenue in the form of taxes paid by more than 10 airlines to land at our own Tahiti-Faa’a International Airport goes to the French treasury. Even taxes from our own airline Air Tahiti Nui are paid to France, along with fees paid to cross through our own airspace. For decades, the fees associated with at least 12 geostationary satellites that cross our spatial area, the telecommunications system - including fiber-optic cables crossing our seabed -, and many more revenue-generating competencies have been controlled by our administering power.

Mr. Chairman, Natural resources and revenues from the territories appear to be the essence of contemporary colonialism. But the inalienable right to self-determination of the People of French Polynesia shall not be impeded by the orchestrated colonial pretext of “inadequacy of political, economic, social or educational preparedness”. We stand ready to work with the U.N. to implement the decolonization mandate for our people, as a matter of urgency. Justice delayed, is justice denied.

Posted by Overseas Review at 10:05 PM No comments: 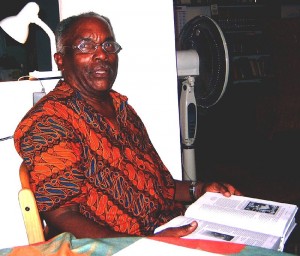 WILLEMSTAD – The popular writer Arion (78) has passed away. A close friend just announced that to media in Curaçao.


Arion wrote in Dutch and Papiamento. His most famous book is “Dubbelspel”, the novel with which he made his debut in 1973.
The book was also made into a film and was the leading book in the 2006 campaign “The Netherlands Reads”. Dubbelspel was handed out for free through the libraries in the Dutch Kingdom.
Frank Martinus Arion, pseudonym of Frank Efraim Martinus, was born on December 17, 1936 in Curaçao in the Netherlands Antilles. He is a poet and a novelist, and a language advocate.
He moved to the Netherlands in 1955 and in 1981 returned to Curaçao, where he became head of the Curaçao Language Institute that promotes the use of the Papiamento language. His works include The Last Freedom (De laatste vrijheid)and Double Play (Dubbelspel). The latter novel is considered to be his magnum opus and was published in 1973.

Posted by Overseas Review at 9:10 PM No comments: