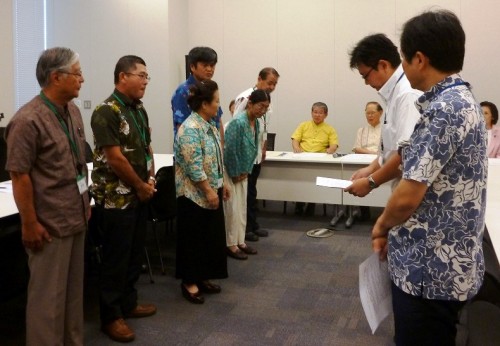 On July 30, Fujiko Matsuda and members of the Association of Residents of the Districts North of Futami delivered a petition to staff of the Ministry of Environment at the Lower House Diet Members' Office.
Ryukyu Shimpo
On July 30, residents of Teima, Nago and the Association of Residents of the Districts North of Futami demanded the Ministries of Environment, Foreign Affairs and Defense stop construction of a new U.S. base in Henoko, Nago. They sent a letter highlighting that the UN Environment Programme (UNEP) has stressed that the ecosystem in Oura Bay should be protected.
After meeting with officials of the three ministries, the association president Fujiko Matsuda and other members held a press conference in the Diet building. Matsuda pointed out that the Ministry of Environment did not include Oura bay in its dugong habitat investigation, and that the Ministry of Defense reported noise predictions lower than the value observed by the Nago municipal government.
She said, “The Ministry of Environment has no sense of responsibility, despite its critical mission to protect the environment.” A ministry official said they have not yet received a letter from UNEP, which has also written to the government to stress the importance of protecting Oura Bay.
The residents of Teima and the Association of Residents of the Districts North of Futami urged UNEP to put pressure on the Japanese government to block the construction of the new U.S. base in order to protect the environment in March. The UNEP Regional Office for Asia Pacific replied in a letter: “We understand the importance of habitat protection for endangered species such as the dugong. We share your concerns and would like to convey that to the Ministry of Environment in Japan.”
(English translation by T&CT, Hitomi Shinzato)
Posted by Overseas Review at 3:45 PM No comments: