Amid claim and counterclaim by activists and politicians over the planned relocation of the U.S. Marine Corps Futenma Air Station, one factor is often ignored: what ordinary Okinawans think about the move.

There was a testy exchange at a news conference Tuesday between Chief Cabinet Secretary Yoshihide Suga and a reporter from the Okinawa Times, one of the prefecture’s two largest newspapers.

The newspaper’s latest poll found that 76.1 percent of residents are opposed to “the construction of a new base” off Henoko in Nago as a replacement for the Futenma base.

The sample size was only 610 respondents, but it nevertheless points to a majority of Okinawans opposing the plan.

The poll, conducted Friday through Sunday, also showed an approval rating of 83 percent for Okinawa Gov. Takeshi Onaga, who has pledged to use every available measure to block the plan to move the base to Henoko.

Suga insisted the move is still on track, saying local leaders elected by Okinawans and who were in power at the time gave the green light.

He ran through the history of the relocation plan. In 1999, he said, then-Gov. Keiichi Inamine and Nago Mayor Tateo Kishimoto agreed to moving Futenma to Henoko, and that the relocation plan drawn up by Tokyo reflects their agreement.

Suga also cited Gov. Hirokazu Nakaima as accepting the plan and agreeing in December 2013 to landfill work off Henoko. That work is now beginning.

“The (central) government listened to opinions of people who are said to represent Okinawan residents,” Suga said.

But if the Times poll is anything to go by, most Okinawans now disagree with their previous leaders’ decisions and want the base moved out of the prefecture altogether.

Observers say it is difficult for Abe to make any compromise over the Henoko project before going to Washington later this month and meeting with President Barack Obama.

Nago citizens appeal to UN to stop new US base construction 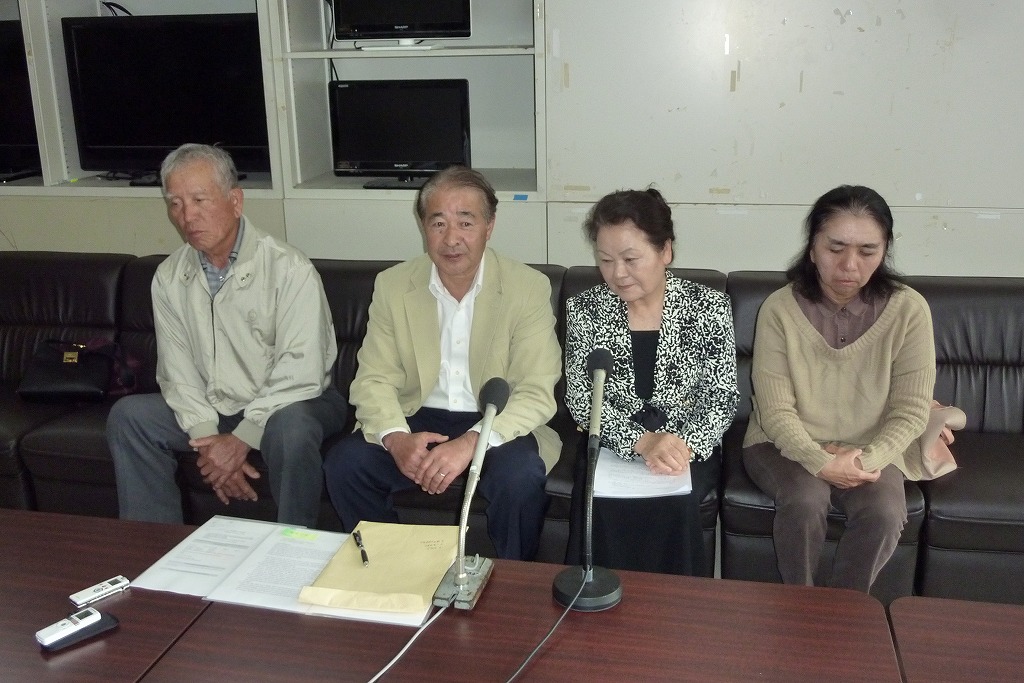 At a press conference held at the Okinawa Prefectural Government’s correspondents club on March 26, Zenzi Nina, the head of the Teima district of Nago, announced that Nago residents had sent documents to the UN to oppose the new base construction.
Ryukyu Shimpo

Zenzi Nina, the head of the Teima district of Nago, and Fujiko Matsuda, president of the Association of Residents of the Districts North of Futami Opposed to the Construction of a New Base at Henoko, Oura Bay, held a press conference at the correspondents club at the Okinawa Prefectural Government office on March 26. They announced that they have sent documents to three United Nations organizations opposing the relocation of U.S. Marine Corps Air Station Futenma to Henoko, Nago.
The Nago citizens sent the documents to the Office for Disarmament Affairs, the Human Rights Council, and the Environment Programme. The documents state that the governments of Japan and the United States are ignoring Okinawan people’s opposition and forcing through building a new U.S. military base, which could lead to environmental destruction of local communities and ecosystems.
Nina said, “We originally thought the governments of Japan and the United States would give up the construction through negotiations. However, they will not. So, we have had no choice but to ask the UN to work on the issue.”

They said they have sent the documents, written in English, to the UN through fax, e-mail, and mail.


(English translation by T&CT)
Go to Japanese
Posted by Overseas Review at 8:03 PM No comments: