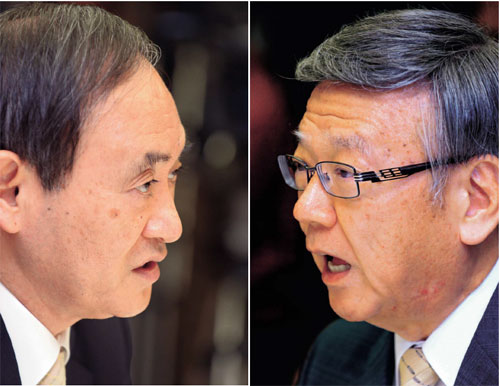 Okinawa Governor Takashi Onaga (right) and Chief Cabinet Secretary Yoshihide Suga (left) talking together for the first time at the ANA Crowne Plaza Okinawa Harborview Hotel in Naha at around 9:35 a.m. on April 5.
Ryukyu Shimpo
The Chief Cabinet Secretary Yoshihide Suga and Okinawa Governor Takeshi Onaga have held a stormy meeting at a Naha hotel. Suga said, “Giving up Henoko relocation could lead to Futenma Air Station becoming a permanent fixture. Based on applicable laws and regulations approved by the former Governor Hirokazu Nakaima, we are carrying out the landfill without making a fuss.” Onaga responded, “Although the chief cabinet secretary repeatedly used the word ‘without making a fuss,’ it reminds me of the third High Commissioner of the U.S. Civil Administration of the Ryukyu Islands, General Paul Caraway who refused to allow Okinawans any increase in self-rule or autonomy.” Onaga strongly criticized Suga, saying, “That attitude fuels the anger of the Okinawan people and makes it impossible to build a new U.S. military base in Henoko.”
The April 5 talks, part of which were open to the public, is the first time that Suga and Onaga have met face-to-face since Onaga won the gubernatorial election in December 2014. A major platform of his campaign was a pledge to stop the relocation of U.S. Marine Corps Air Station Futenma to the Henoko district of Nago.
At the beginning of the meeting, Suga talked about how the Japanese government had been working to reduce Okinawa’s burden, (in terms of the island hosting so many US bases.) He also spoke about plans to promote the island. He said, “We would like to work together with the Okinawan people and we would like the people to trust us once again.”
Onaga said, “The difference between me and the former governor comes down to the approval of the Henoko landfill. The decision to approve the reclamation was a major issue in the last gubernatorial election. My victory in that election by a margin of 100,000 votes shows the overwhelming opposition felt by the Okinawan people to the Henoko relocation plan.”
Onaga told Suga that he understood the importance of the Japan-U.S. security arrangements. However, he added, “The U.S. military forcibly took over Okinawan land to build bases, which continues to bring huge sufferings to the people today. The Japanese government claims that Okinawa should bear the burden of hosting a new base because Futenma Air Station is the world’s most dangerous base. If Okinawan people oppose it, the Japanese government blames Okinawans for not thinking about the importance of Japan’s security.” Onaga continued, “The fact the Japanese government is making such an unreasonable demand clearly shows how low Japanese politics has sunk.”
Onaga went on to say that if the Henoko relocation was cancelled, the Japanese government would be responsible for what happened next, “You and the former U.S. Secretary of Defense Donald Rumsfeld said that Futenma Air Station is the most dangerous base in the world. I would like to know whether the base will become a permanent fixture if the Henoko relocation does not work.”
Onaga intends to keep the conversation going with the central government while at the same time considering how best to exercise his powers as governor. This may result in him cancelling his predecessor’s order to approve construction work on the Henoko seabed.
The Naha meeting lasted an hour. During the 30 minute closed-door portion, Onaga and Suga exchanged opinions without the presence of their administrative officers.
(English translation by T&CT)
Posted by Overseas Review at 12:19 PM No comments: