Seeking a course: forum to discuss self-determination for Okinawa 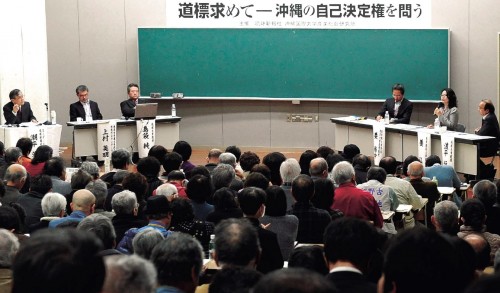 In the afternoon of February 15, at the Okinawa International University in Ginowan City, intellectuals discussed Okinawa’s future at a panel forum "Seeking a course" to confirm Okinawa's right to self-determination.


Ryukyu Shimpo
On February 15 at the Okinawa International University, Ryukyu Shimpo and the Okinawa International University Institute of General Industrial Research held a forum called “Seeking a course-discussions of Okinawa’s right to self-determination.”
Intellectual panelists talked about the vicious cycles of discriminatory and colonial situations following the annexation of the Ryukyu Kingdom, known as the Ryukyu disposal in 1879, and World War Two, in which Okinawa was sacrificed. They claimed that now is the time for Okinawa to claim the right to self-determination and peace. They added that Okinawa could be a hub of conversations and exchanges in Asia.
Kang Sang-jung, president of Seigakuin University, suggested Okinawa declare itself as a demilitarized autonomous zone in Asia. Other intellectuals suggested Okinawa should make use of business opportunities with Asia and develop a cosmopolitan hub of human resources for Okinawa’s economic self-sufficiency.

Kang delivered a keynote speech with the title of “Ryukyu and Asia-debates over sovereignty.” Kang explained that the role of the U.S. military in Okinawa will diminish if Okinawa can build a security framework among Asian countries and regions. He said, “In order to do so, we need to overcome the issue of the divided Korean peninsula which is a symbol of the disjuncture of Asia.” Kang continued, “We need to stop the Cold War in the Korean peninsula, and strengthen the ties of solidarity in Asia.”


The first session was a discussion on the theme of “Lessons from history, and looking to futures.” Professor Hideaki Uemura of Keisen University pointed out the annexation of the Ryukyu Kingdom is internationally illegal based on treaties such as the 1854 Ryukyu-U.S. Treaty of Amity.
Beijing Normal University Associate Professor Kyo Ko claimed, “If East Asia is not at peace, Okinawa is not peace. If Okinawa is not at peace, there will be no peace in East Asia.” He said he hoped to promote exchanges between Okinawa and China.
Referring to the issue of the relocation of Futenma Air Station to Henoko, Professor Tsuneo Namihira of the University of the Ryukyus stated, “Now is the time to claim our self-determination and peace.”
Professor Jun Shimabukuro of the University of the Ryukyus said, “First of all, it is crucial to create the Bill of Rights for Okinawa. For that, it is important for people in Okinawa to be aware that we are subjects who hold the rights to self-determination.”
In the second session “Rights to Self-determination and the Economy of Okinawa,” Professor Moritake Tomikawa of Okinawa International University (OIU) explained that business expansion in Asia has started. Professor Ken Nakachi of OIU suggested promoting medical tourism. Chokei Taira, Kariyushi Group CEO, said, “Okinawa needs to decide on its own tourism infrastructure development and acquire the right to control relaxation of regulations.” Ryo Okada of Naha Business Incubate Office stated, “Transferring the latest information technology to Okinawa is very important.”
About 600 people audited the panel discussions.
(English translation by T&CT and Megumi Chibana)
Go to Japanese
Posted by Overseas Review at 4:02 PM No comments: