Forced annexation of Okinawa seen as violation of international law


ACSILs demands an apology for annexation of Ryukyu, calling it a “Violation of International Law” 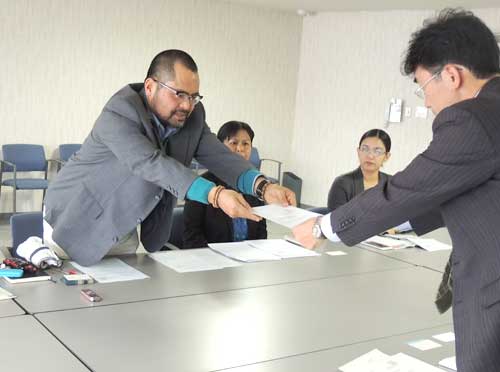 On February 3, Yasukatus Matsushima, the delegate of ACSILs, handed the request to Shunji Yamada, Senior Coordinator at the Okinawa Office of Ministry of Foreign Affairs of Japan in Naha.
Yasukatsu Matsushima and three co-leaders of the Association of Comprehensive Studies for Independence of the Lew Chewans (ACSILs) visited Senior Coordinator Shunji Yamada at the Okinawa Office of Ministry of Foreign Affairs of Japan.
They protested that the forced annexation of the independent nation of the Ryukyu Kingdom by Yamato (Japan) is an obvious violation of international law. The group demanded from the Japanese government an apology and “immediate cessation of the colonization of Ryukyu.” The delegates also requested retrocession of the original copies of three treaties between Ryukyu Kingdom and the United States, France, and the Netherlands, signed with each country during the 1850s. The Diplomatic Archives of the Ministry of Foreign Affairs of Japan is currently holding the treaties. The group members stated that these treaties were disregarded in the forced annexation of the Ryukyu Kingdom.
This is ACSILs’ first direct action taken against a government-related agency. Matsushima and co-leaders argue that Ryukyu was a sovereign nation at the time of annexation of the kingdom or the so called Ryukyu disposal in 1879, on the ground of the three treaties. The delegates further argue the “forced annexation” is a failing of article 51 under the Vienna Convention that forbids “Coercion of a Representative of a State.”
Matsushima and co-leaders also requested immediate cessation and cancellation of construction of a new military base in Henoko and helipads in Takae, Higashi. They argued that imposing an unreasonable U.S. base-hosting burden on Okinawa is discrimination against Ryukyuan people. The delegates plan to mail the request document to President Barack Obama. They will also mail a letter to ask the Okinawa Prefectural Government and the Prefectural Board of Education to create and expand opportunities to teach Ryukyuan history, nature, and language for students.
Matsushima and co-leaders held a press conference after the protest. They announced the delegates appeal to the United Nations to help them raise their voice against discrimination toward the Ryukyu, in collaboration with the indigenous people of Chamorro in Guam.
(English translation by T&CT and Sayaka Sakuma)
Posted by Overseas Review at 7:19 PM No comments: