Posted by Overseas Review at 9:57 AM No comments: 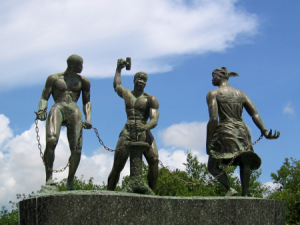 WILLEMSTAD – A slave revolt took place in Curaçao on August 17, 1795 led by Tula, a local slave, and resulted in a month-long conflict on the island between escapees and the colonial government. This revolt was commemorated yesterday at the slave monument at Rif.


The western side of the island called Bandabou had between 4,000 and 5,000 inhabitants in 1795, mostly enslaved.
The slave Tula had been preparing the insurrection for some weeks. On the morning of August 17, 1795, at the Knip plantation of slave master Caspar Lodewijk van Uytrecht, Tula led an uprising of 40 to 50 people. The enslaved met on the square of the plantation and informed van Uytrecht they would no longer be his slaves. He told them to present their complaints to the lieutenant governor at Fort Amsterdam. They left and went from Knip to Lagun, where they freed 22 slaves from jail.
From Lagun, the liberators went to the sugar plantation of Santa Cruz, where they were joined by more rebels under Bastian Karpata. Tula then led the liberated people from farm to farm, freeing more people.
The slave owners had now retreated to the city, leaving their plantations unprotected. At the same time, a confederate French slave, Louis Mercier, led another group of freed slaves to Santa Cruz, where he took the commandant, van der Grijp, and ten of his mixed race soldiers as prisoners. Mercier also attacked Knip, where he freed more slaves and took some weapons. He then rejoined Tula, locating him by following the trail of destruction Tula had left behind. 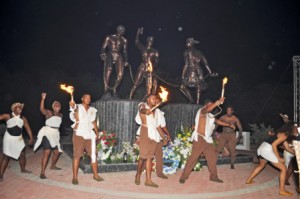 The rebels began a guerrilla campaign, poisoning wells and stealing food. On September 19, Tula and Karpata were betrayed by a slave. They were taken prisoner, and the war was effectively over. (Louis Mercier had already been caught at Knip.) After Tula was captured, he was publicly tortured to death on October 3, 1795, almost seven weeks after the revolt began. Karpata, Louis Mercier and Pedro Wakao were also executed. In addition, many slaves had been massacred in the earlier repression. After the revolt had been crushed the white Curaçao government formulated rules that provided some rights to slaves on the island.


August 17 is celebrated each year to commemorate the beginning of the liberation struggle. When the race based system of slavery was finally abolished on the island in 1863, there were fewer than 7,000 slaves.
The commemoration took place at the monument dedicated to Tula and the rebels. This monument is located near the Holiday Beach Hotel. It is the site where Tula was executed.
Posted by Overseas Review at 4:00 PM No comments:

esmond Tutu states lawsuit “good for humanity,” and all U.S. mayors agree in Resolution to back the nuclear disarmament lawsuit


Krieger: It has been heartening to see how much support the Marshall Islands have received. In addition to the U.S. Conference of Mayors, the Marshall Islands lawsuits have been supported by major civil organizations, including Greenpeace International, the International Physicians for Prevention of Nuclear War (including Dr. Helen Caldicott), the World Council of Churches, the International Lawyers Against Nuclear Arms, and the Nobel Women’s organization. It has also received the support of many individual leaders, including Nobel Peace Laureates Archbishop Desmond Tutu, Mairead Maguire, Oscar Arias, Jody Williams, and Shirin Ebadi. More than five million people have also signed a petition in support of the Nuclear Zero lawsuits filed by the Marshall Islands.
Posted by Overseas Review at 11:56 AM No comments:

The “Occupy Bonaire” action came to an end last Friday morning following 222 days of very visible action to request a new referendum to re-evaluate the constitutional status of the island of Bonaire.

James Finies’ NKBB- Nos Ke Boneiru Bek- group set themselves up in front of the government offices last year with posters in three languages to inform locals and tourists of their viewpoint. Last week the new Bonaire government very publically agreed with NKBB in a small ceremony at the protest site.

The governor and two commissioners shook hands with Finies who commented, “The people want to have a referendum on the governing status of Bonaire so the people will have a referendum. My gratitude and appreciation goes to the wise patience and tolerance of the Governor and the practical wisdom of the members of the coalition for listening to the representatives of a majority of the locals and population of Bonaire.”

Posted by Overseas Review at 11:56 PM No comments:

The Northern Mariana Islands, along with the other U.S. dependencies of Guam and American Samoa enjoy membership in the Pacific Community.

Following a request from the Commonwealth Healthcare Corporation for additional expertise in the wake of typhoon Soudelor, the Secretariat of the Pacific Community (SPC) has sent a senior epidemiologist to Saipan to assist with public health surveillance.


SPC epidemiologist, Dr Paul White, has arrived in Saipan from SPC headquarters in Noumea and will work closely with the Commonwealth Health Authorities and partners from the US Centre for Disease Control and Prevention over the next two weeks.

“We’re very pleased to provide epidemiology support to our colleagues in the Commonwealth of the Northern Mariana Islands to ensure public health security in the aftermath of the devastating typhoon Soudelor,” SPC Director-General, Dr Colin Tukuitonga, said.

“In post-disaster situations, SPC is able to provide specialised support and services to Pacific Community members based on their specific needs,” he said.

Rated by the Joint Typhoon Warning Centre as a category two when it devastated parts of the Northern Mariana Islands, typhoon Soudelor intensified early last week to a maximum category five before reaching Taiwan and China.

Dr White will assist with setting-up post-disaster surveillance systems in designated areas, such as temporary shelters for displaced people.

He will also provide assistance with the collection, analysis and dissemination of real-time health data and timely response to potential disease outbreaks.

Posted by Overseas Review at 9:18 PM No comments:

The White House has rejected a bailout package for Puerto Rico days after the U.S. territory failed to pay a small portion of the massive $72 billion it owes to bondholders. It was the biggest municipal bond default in U.S. history. Unlike U.S. states and municipalities, Puerto Rico cannot declare bankruptcy. Juan González discusses how the roots of the crisis are deeply tied to Puerto Rico’s colonial status.

GOVERNMENT OF NIUE OFFICE OF THE PREMIER

The Government of Niue has established Diplomatic Relations with the Republic of Kosovo (on) 23rd June 2015.

Facts about: The Republic of Kosovo is a state that was established in 2008 in the central Balkan Peninsula. It is bordered by the Republic of Macedonia and Albania to the South, Montenegro to the West and Serbia to the North East.

A full description of the divisions under the Premiers Office can be located in the Cabinet Page.

The Niue Legislative Assembly is within the Premiers Office, and


is headed by the Speaker of The House of Assembly. The Niue Public Service has recently made a Transformation, after lengthy
planning and architect of the long standing construction.

The previous structure contained different departments within the Niue Public Service, however the new transformation involves the collective of all departments under 3 Ministries and 2 Agencies.

The new structure is designed for efficiency and to expedite delivery of Services.

The Government of Niue continues to encourage the Development of Niue for the Benefit of ALL Niueans in Niue as well as Abroad.

The Premier of Niue says other nations are making it poor by not sharing returns made off of Niue's resources.

US$3.4 billion worth of tuna was caught in the Exclusive Economic Zones of Pacific Countries last year with an additional 400 million dollars worth of tuna estimated to be taken illegally.

Pacific owners receive around 14 per cent of the market value of the resource.

Toke Talagi told the United Nations Security Council Niue is often described as poor despite having plenty of fish and sea-bed minerals.

He says other countries need to rethink their behaviour in the Pacific.

Talagi says true partnerships need to be developed that endorse sustainable harvesting of resources in Niue.

Posted by Overseas Review at 12:32 PM No comments: