Indigenous Papuans still fight for self-determination, more than 40 years after Indonesia acquired the territory in a sham ballot 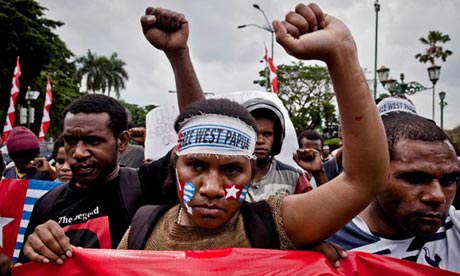 West Papuan students in Yogyakarta protesting in support of independence for the territory, which has been part of Indonesia since 1969. Photograph: Ulet Ifansasti/Getty
Indonesia officially acquired West Papua in 1969, after a sham ballot on independence in which only a handful of the local population were allowed to vote.
The region, which makes up the western part of the island of New Guinea to Australia's north, was once a Dutch colony, but the Netherlands began to prepare for withdrawal in the 1950s.
In 1961, West Papuans held a congress to discuss independence and raised the West Papuan "morning star" flag.
But a newly independent Republic of Indonesia began to assert its claim over the province and a conflict broke out between Indonesia, the Netherlands and the indigenous population.
In 1962, a United Nations-sponsored treaty known as the New York agreement was drawn up to put an end to this territorial battle, and Indonesia was appointed temporary administrator of West Papua from May 1963 – without West Papuan consultation or consent.
A key requirement of the treaty was that all West Papuans be allowed to vote in a referendum on independence, which was to be overseen by the UN.
But when the ballot was held in 1969, it was far from free and fair: the Indonesian military handpicked 1,026 leaders to vote on behalf of the entire population, and threatened to kill them and their families if they voted the wrong way.
In this environment, the outcome of the so-called "Act of Free Choice" was unanimous – and Indonesia's takeover of West Papua was rubber-stamped by the UN.
Almost all indigenous Papuans reject the referendum, dubbing it the "act of no choice", and many continue to demand a real vote on self-determination to this day.
This history forms the basis for West Papuans' call for independence – but it is not just historical injustice that fuels the movement today.
Indigenous West Papuans face daily surveillance and intimidation by the Indonesian military and police, and many report living in constant fear. Thousands have been killed, detained and tortured since 1963.
Those who agitate for independence openly do so at a high personal cost. It is illegal to raise the morning star flag and many of the province's leaders are sitting out long jail terms for peaceful acts of defiance.
The region has an armed movement for independence that has been responsible for the deaths of Indonesian security personnel and actively engages in armed skirmishes, but there is a much larger civil movement that is also heavily suppressed.
In October 2011, the Third Papuan People's Congress, a civilian gathering that addressed issues of self-governance, was violently quashed by Indonesian forces. Six people were killed and dozens more injured.
Indonesia guards its "territorial integrity" jealously. And it's no surprise – the massive Freeport McMoran gold and copper mine in West Papua is one of the country's largest taxpayers.
For its part, Indonesia argues that since West Papua was once a part of the Dutch East Indies, it should also be part of today's independent Indonesian Republic.
Both major Australian political parties support them in this stance.
Indonesia is seen as an important political ally for Australia, and politicians from both sides are loth to antagonise their Indonesian counterparts. Australia maintains close ties with the Indonesian military. It also provides training and funding for its counter-terror police unit, Detachment 88, which has been involved in recent crackdowns on the independence movement.
But Australia is home to a significant West Papuan community and a large network of supporters of West Papuan independence. The West Papuan Freedom Flotilla is the latest in a long history of co-operation between activists from the two countries.