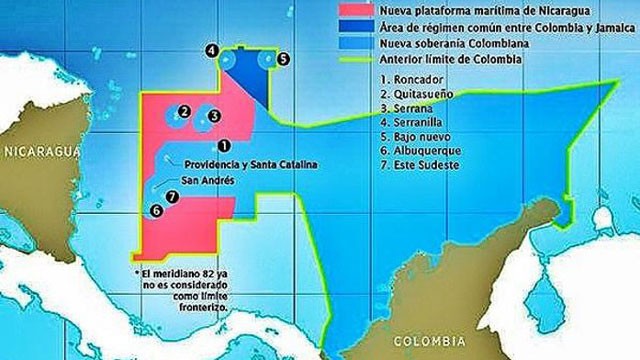 A ruling from the International Court of Justice in The Hague, granted Nicaragua the areas in pink, while Colombia retained sovereignty over the island of San Andres and a maritime corridor that connects it with mainland Colombia.
elcronistadigital.com


In the past eight months, tensions have flared between Colombia and Nicaragua over a maritime territorial dispute that has led to a local arms race.

Both countries’ armies have announced new weapons purchases as part of an effort to modernize their military, and war is already viewed as an actual possibility by members of both armies.

“We’re not facing an imminent confrontation with this Central American country,” a high-ranking Colombian officer told El Espectador. “But it has become a priority in what we call the ‘sand boxes’ [war training exercises based on possible conflict scenarios], which are nothing more than our troops’ preparation for the worst while hoping for the best.”

The causes of the conflict are fairly recent.

In 2001, Nicaragua sued Colombia at the International Court of Justice (ICJ) over a significant portion of Colombian maritime territory. For 11 years, Nicaraguan lawyers argued that nearly 50,000 square kilometers of Colombian sea in truth belonged to the Central American nation. The area in question included the archipelago of San Andrés, Providencia, and Santa Catalina, a group of tropical islands surrounded by coral reefs, which are located 482 miles from the Colombian coast and just 140 miles from Nicaragua, but have been settled by Colombians since the 19th century.

In November 2012, the ICJ ruled that the archipelago and most of the contended territory belonged to Colombia. The court also said, however, that an area containing two islets, potential gas and oil reserves, and a major industrial fishing spot that benefitted San Andrés’ residents, was indeed part of Nicaragua.

As a result of the decision, the relationship between both countries has been steadily strained and the tone has become increasingly hostile, raising concerns about a possible confrontation.

“There is a real necessity to acquire war material to guard these new and vindicated seas,” said Julio César Avilés, head of the Nicaraguan military. “We need new naval resources to insure Nicaragua’s sovereignty over these waters.”

In Colombia, the ICJ’s ruling spurred accusations of international diplomatic foul play, an internal political crisis, and problems between Colombia’s national government and the San Andres community. President Juan Manuel Santos, who rejected the ICJ’s ruling immediately after it was announced, has since called for a commission of experts to review Colombia’s judicial and diplomatic options.

For Colombia, a country that is even considering an utter dismissal of the ICJ decision to reclaim the area, Nicaragua’s activities in the contended territory are seen as an affront further increasing the growing tension between the two nations.

“If Nicaragua starts threatening us with these Russian ships, then Colombia must call on other countries to increase its maritime force with other ships,” Colombian Senator Alexandra Moreno Piraquive recently said.

The chances of a full out war are incredibly slim, though. War is a last resort that both countries would try to avoid at all costs.

Colombia is in the midst of a civil conflict and the government would be unlikely to welcome the opening of a new front in the Caribbean Sea.

Nicaragua, on the other hand, faces a military disadvantage when compared with the South American nation, so it is highly unlikely that it would choose to initiate a confrontation.

Furthermore, Nicaraguan authorities have made an effort to lower the tone of their statements in the past few days.

“We don’t want a war,” Nicaraguan general Julio César Avilés said after being asked about his nation’s weapon purchases. “They are ships with a greater autonomy to navigate those vast spaces. Colombia shouldn’t worry about those acquisitions.

Posted by Overseas Review at 11:08 AM No comments: