Curacao Prime Minister will not yield to Interim Cabinet


Schotte is not stepping down 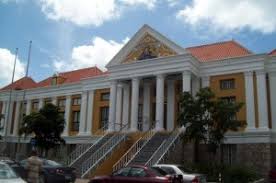 WILLEMSTAD--Outgoing Curaçao Prime Minister Gerrit Schotte (MFK) will not respond to a call to make way for an interim cabinet. He made his decision known in a letter to Governor Frits Goedgedrag dated September 25.
In the letter Schotte argued that the decision to replace his already-resigned cabinet after earlier agreeing to dissolve Parliament and call snap elections on October 19 was insufficiently motivated. In the young prime minister's opinion, the governor is only allowing the current majority to retaliate by having the caretaker government sent home under the guise of a lack of confidence.

According to him, this goes against the constitutional norms that create the possibility that Parliament sends government home, but also that government may dissolve Parliament and call new elections.

Schotte accused Goedgedrag of having an apparent political preference for 12 Parliament members. "It surprised me that as a good Governor of Curaçao you chose to form an interim cabinet rather than calling on the Members of Parliament to fulfil their duties."

Furthermore, according to the prime minister, Goedgedrag did not have jurisdiction in this case. Schotte referred to the position the governor took in his letter to government and Parliament, in which he indicated that the correct course of action in this case was not to follow the political preferences of the incumbent ministers, because it involved another parliamentary majority.

Schotte said he found it incomprehensible that it was now all about a majority in Parliament and that importance no longer was given to the caretaker status of government and the underlying act of dissolving Parliament.

"The current Constitution leaves no room for the governor to act without the approval of the cabinet. I think your statement follows the existing political division in our country, while your performance ought to be directed only at promoting unity," he said.

Schotte further stated that he would not cooperate with "any outcome whatsoever in the implementation of your decision to form an interim government" and called on Goedgedrag to cease the formation of an interim cabinet.

Posted by Overseas Review at 9:10 PM No comments:

Young Saharawis are fed up with the futile peace process

A recent survey carried out by Polisario’s youth wing found                           that over 85 per cent of the young Saharawis polled were in favour of ending the current ceasefire with Morocco and returning to war.

Young Saharawis are fed up with the United Nations-led peace process between the leaders of the Western Saharan liberation movement, Polisario, and the Moroccans who have colonized most of their country since 1975.

The peace process has lasted for over 20 years, but has yet to produce any significant breakthroughs for the Saharawis, who simply demand the referendum that is to determine the status of Western Sahara that they have been promised by the United Nations.

‘But the United Nations has not been able to assume its responsibilities. The current negotiations are worthless, since they have been used by Morocco to prolong the suffering of our people in the refugee camps and the occupied territories,’ says 24 year old Saharawi journalist, Salama Mohamed.

Salama Mohamed is a member of the Saharawi student union, UESARIO’s, office for human rights. He presently uses his degree in English literature as a translator journalist at the Sahara Press Service.

As is the case with many other Saharawi youths, Salama believes that a return to war against Morocco might be the better of two evils. A recent survey carried out by Polisario’s youth wing, Ujsario, found that over 85 per cent of the young Saharawis polled were in favour of ending the current ceasefire with Morocco and returning to war.

‘Young people here are well aware of the devastating consequences of war but they have nothing to lose,’ says Salama. ‘They are frustrated by the damning situation of ‘no peace, no war’, the human tragedy in the camps, the ongoing repression carried out by Moroccan security and military apparatus in the occupied territories.’

Simply waiting for Morocco and her allies to end Moroccan colonialism is no longer an option, Salama says in his capacity as a member of Saharawi union, UESARIO’s, executive office. ‘We call for reinforcing the peaceful Intifada in the occupied territories. Meanwhile, urgent measures should be taken to strengthen the capability of the Saharawi People’s Liberation Army.’

Like most Saharawis living in the inhospitable refugee camps in a dessert area near Tindouf in South Western Algeria, where around 165.000 Saharawi refugees survive on aid from the UN and the EU, Salama’s family fled the advancing Moroccan forces that colonized Western Sahara in 1975.

‘My mother was seven years old when she fled from her homeland with her family. But she still remembers the brutal bombing that targeted the defenseless refugees on their way to the Algerian desert,’ says Salama. ‘And like all Saharawi men at the time my father fought in the Saharawi Peoples’ Liberation Army, ELPS. I lost two uncles during the war.’

Salama was born and raised in the camps until he was 11 years old where he left to finish his education in Algeria. Like most Saharawis, he dare not return home to Moroccan occupied Western Sahara. ‘We feel homesick. I have never met a large part of my family who live in the occupied territories.’

The rate of literacy and educational level of the Saharawis in well above the regional average, but due to a lack of job opportunities in the Tindouf refugee camps and Moroccan discrimination in the occupied territories, most Saharawi students either have to find jobs abroad or work in the ministerial departments or other institutions of the Saharawi government in exile, the Saharawi Arab Democratic Republic (SADR), which is based in one of the refugee camps.

‘Saharawi students have been subject to assaults, assassinations, harassment and discrimination by Moroccan authorities in the occupied territories,’ says Salama Mohamed. ‘Presently, six Saharawi students have been at Sale prison in Morocco since Novemebr 2011 for participating in a peaceful demonstration. We are extremely concerned about their deteriorating condition of health after they have been on hunger strikes.’

But regardless of these hardships, young Saharawis and students in particular are playing an increasingly important role in the fight against Moroccan colonialism and for a referendum.

‘Students are playing a leading role in the long-standing struggle of our people - also in making the voice of the Saharawi students heard in the [SADR] government and with the Polisario,’ Salama Mohamed says. And Internationally, UESARIO petitions the EU and other countries, participates in international forums such as the World Social Forum, have established ties with other students’ unions around the world, and organizes demonstrations in front of e.g. the French Embassy.

WRITER’s NOTE: The views expressed in this article are in accordance with those of the executive of UESARIO, with whom Salama has discussed the issues raised in this article beforehand, as well as with Saharawi students in general, as Salama has also raised these issues with many of them.

Posted by Overseas Review at 9:41 AM No comments: