UK Lord Ascroft under pressure over dealings in Turks & Caicos 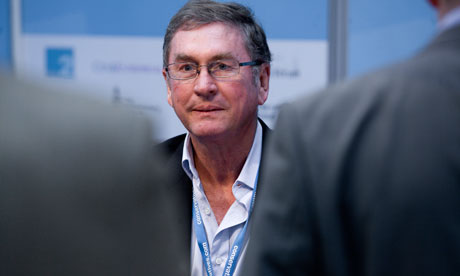 Lord Ashcroft has denied any links to the firm that built a $6m mansion for the Turks and Caicos’s former leader. Photograph: Martin Argles for the Guardian

Tory donor Lord Ashcroft is facing fresh questions about his involvement with a collapsed construction company linked to an alleged political corruption scandal.

Ashcroft, the former deputy chairman of the Conservative party, has denied having any interest in Johnston International, which built a $6m mansion for the former premier of the Turks and Caicos Islands, Michael Misick, who is now the subject of an international arrest warrant after fleeing the Caribbean archipelago, having been accused of corruption.

Johnston was a significant employer in the Caribbean before it went under in 2010, as the property boom turned to bust. The company was responsible for some of the region's largest developments, building marinas, airports, hotels and resorts.

Ashcroft told the London Stock Exchange in 1999 that he had sold Johnston, and has said he has "had no economic beneficial or legal interest" in the company since.

But a series of faxes to Ashcroft from the chief executive of Johnston, Allan Forrest, seen by the Observer, show that he was regularly updated on the company's pitch to win contracts to build two new hospitals and an airport in the islands. The faxes, from 2004 and 2005, and headed with the Johnston International logo, spell out how Forrest proposed to structure its bid and inform Ashcroft of the costs.

The revelations come as the role of political donors in Britain dominates the headlines, after a newspaper sting led to the resignation of Peter Cruddas, the Tory co-treasurer, in a cash-for-access scandal. Ashcroft has been the party's biggest donor in recent years, giving, along with his wife, Susan Anstey, almost £6m over the past decade.

In one of the faxes, sent in April 2004, Forrest tells Ashcroft, who was apparently planning to visit the Turks and Caicos: "We also understand that other people have been chasing the government with hospital proposals and I was told last week that the government had been presented with a 'first-class proposal from a Canadian group'."

Forrest concludes: "If you want me to get involved with setting up the visit, let me know. I am just concerned that unless we nail the appropriate people well in advance, there is a high risk that this visit might be unfruitful." Forrest told Ashcroft that he had been briefed by government officials that one idea was to pay for the hospitals by adding $10 to airport departure tax. "We should take the time… if your programme suits to discuss these issues with FH [Floyd Hall, the deputy premier] and MM [Misick]."

The hospitals' contract was controversial in the Turks and Caicos. The previous government had planned to build a hospital at a cost of between $40m and $50m. The Misick government instead commissioned the construction of a 20-bed hospital in Providenciales – the largest of the islands – and a 10-bed hospital in Grand Turk, using a private finance deal that led to the two new health centres opening in 2010.

Under the terms of the agreement, the islanders pay about $22m a year for the next 25 years – almost $600m – for the $124m invested by a Canadian health company and its financial backers who awarded the $65m hospitals construction contract to Johnston.

An official report into systemic fraud allegations on the islands, a British overseas territory, by Sir Robin Auld, a British judge, suggested there may be merit in investigating the awarding of the contracts to "Johnston International for two new TCI hospitals, said to have been overpriced and awarded without any appropriate tender process".

Concerned islanders have asked to see the details of the contract, but their requests have been blocked by British officials. The Liberal Democrat peer Lord Oakeshott has pledged to table parliamentary questions to establish whether a copy of the contract can be released to parliament.

A UK team investigating the fraud allegations has been interviewing former members of Misick's government. The politicians have signed affidavits shining light on discussions between Misick, his deputies and business leaders, that are expected to form key parts in any resulting criminal prosecutions.

In a libel case against the former owners of the Independent newspaper earlier this year, it was alleged that Ashcroft profited from a construction boom in the islands. A court was told that he "funded this boom, he constructed this boom, through Johnston, knowing this boom was being created through systematic corruption". Ashcroft denies the claims.

Johnston's parent company, a business called Oxford Ventures based in the British Virgin Islands tax haven, has also collapsed, leaving creditors out of pocket. Chris Johnson, a Cayman Islands-based liquidator charged with winding up Oxford's affairs, has been in contact with Ashcroft's son, Andrew, the head of the BCB Bank in the Caribbean that was one of Oxford's creditors, to see if he can help shed light on its collapse.

Johnson said that, while he had been assembling the history of Oxford, he had been hampered by the fact that "substantial documentation has strangely gone missing and computer servers seemingly have been tampered with".

He said that the reconstructed records showed that Oxford's losses went back as far as 2006, when the company was in effect insolvent due to large losses on construction projects in St Lucia and Barbados. "Why the company was permitted to continue to trade is beyond my wildest imagination," Johnson said.

A spokesman for Ashcroft declined to comment.
Posted by Overseas Review at 1:52 PM No comments: