Gil Noble, a television journalist who hosted “Like It Is,” an award-winning Sunday morning public affairs program in New York, one of the longest-running in the country dedicated to showcasing black leadership and the African-American experience, died on Thursday in a hospital in Wayne, N.J. He was 80. 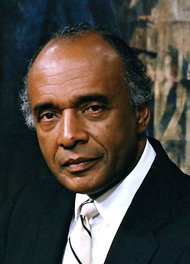 Gil Noble
The cause was complications of a stroke he had last summer, said Dave Davis, president and general manager of WABC-TV, which had broadcast “Like It Is” since 1968.
Though broadcast only in the New York metropolitan area, “Like It Is” attracted guests of national and international influence. Some were controversial. His interviews with figures like Louis Farrakhan of the Nation of Islam drew complaints of one-sidedness. But for Mr. Noble, that was the point:
“My response to those who complained that I didn’t present the other side of the story was that this show was the other side of the story,” he said in 1982.
His interviews comprised a veritable archive of contemporary black history in America: hundreds of hourlong conversations with political and cultural figures like Lena Horne, Fannie Lou Hamer, Bill Cosby, Sammy Davis Jr., Muhammad Ali, Andrew Young, Dizzy Gillespie and Stokely Carmichael.
Mr. Noble viewed “Like It Is” as a platform for ideas and perspectives — especially those of blacks — that were missing from the mainstream news media. He once called his show “the antidote to the 6 and 11 o’clock news.”
His one-on-one exchanges with African and Caribbean heads of state, including Kenneth Kaunda of Zambia, Michael Manley of Jamaica and Robert Mugabe of Zimbabwe, were part of another mission: to report on events affecting people of African descent throughout the world.
“You learned a lot watching Gil,” former Mayor David N. Dinkins of New York said in an interview for this obituary. “You didn’t have to agree with everything he said, but for many of us, he was required watching.”
The deep support Mr. Noble enjoyed among his viewers helped him survive two controversies stemming from interviews with figures considered anti-Semitic, biased against Israel or both. In 1982, the Anti-Defamation League accused Mr. Noble of showing an anti-Israel bias when he broadcast a panel discussion about the Israeli invasion of Lebanon without presenting the Israeli perspective.
Just the rumor of disciplinary action prompted protests outside WABC headquarters, led by the Rev. Calvin O. Butts, pastor of the Abyssinian Baptist Church in Harlem, and the Rev. Al Sharpton. No disciplinary action was taken, but Mr. Noble was required to present a program with pro-Israeli guests.
Similar tensions arose in the summer of 1991, when Mr. Noble made plans to broadcast a speech in which a friend, Leonard Jeffries, a City College professor of black studies, was said to have made bigoted remarks. News reports had led to Mr. Jeffries’s removal as chairman of the black studies department.
Mr. Noble argued that only by hearing the speech in full could college officials (and everyone else) decide whether the remarks were cause for discipline or had been taken out of context. (In one remark, Mr. Jeffries said Hollywood movies demeaning to blacks were made by “people called Greenberg and Weisberg and Trigliani.” In another, he said, “Everyone knows rich Jews financed the slave trade.”)
WABC-TV executives shelved the segment, saying it could aggravate racial unrest in the city. As it happened, long-simmering tensions between blacks and Jews in the Crown Heights section of Brooklyn exploded into violence the next week.
Protesters again appeared outside the station’s offices. This time, they included a state senator, later to be governor of New York, David A. Paterson.
“It was a spontaneous protest as I recall,” Mr. Paterson said in an interview. “People just showed up. Because ‘Like It Is’ — it was something special in the African-American community, to be protected.” A segment on the Jeffries affair was eventually shown later.
“Some white Americans are repelled by ‘Like It Is,’ but that’s the nature of the program,” Mr. Noble told The Village Voice later that year. “We are witnessing a quarrel between the races in America, and certain opinions in the black community must be heard even if they are revolting.”
After Mr. Noble’s stroke, WABC-TV began broadcasting “Here and Now,” a public affairs show it described as “continuing the legacy of Gil Noble.”
Gilbert Edward Noble was born in Harlem on Feb. 22, 1932, the son of Rachel Noble, a teacher, and Gilbert R. Noble, who owned an auto repair shop. Both parents were born in Jamaica. He attended City College and was drafted into the Army during the Korean War.
Mr. Noble was hired as a reporter for the radio station WLIB in 1962. In 1967, after nationwide race riots that prompted television stations around the country to recruit some of their first black reporters, he was hired by WABC. He worked as reporter, weekend anchor and sometime correspondent for “Like It Is,” a show begun in 1968, before taking over as its host in 1975. He received seven Emmy Awards.
Mr. Noble’s survivors include his wife, Norma Jean; their four daughters, Lynn, Lisa, Leslie and Jennifer; a son, Chris; and eight grandchildren.
Milton Allimadi, publisher of the Harlem-based newspaper Black Star News and an occasional guest on Mr. Noble’s show, described the special regard in which Mr. Noble was held in the community he served.
After Mr. Allimadi appeared as a guest on the show, strangers stopped him on the street to shake his hand, he wrote in an online appreciation last August. “When I enter an M.T.A. bus, drivers refuse to accept my fare,” he wrote, “saying they are happy to drive someone who has been on ‘Like It Is.’ ”
Posted by Overseas Review at 1:08 PM No comments: