193 nuclear tests carried out on the Mururoa and Fangataufa atolls between 1966 and 1996 have left a dangerous legacy. 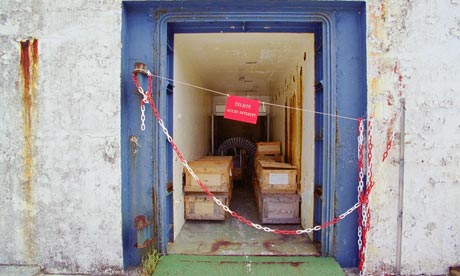 A sheltered bunker for the nuclear fire control point on Mururoa atoll. Photograph: Eric Feferberg/AFP
Seen from the air, the coral ring that separates the deep blue of the ocean from the lighter water of the lagoon lends Mururoa and Fangataufa atolls a sense of normality. But the picture changes dramatically as you come closer. Parts of the islands are covered in concrete and the vegetation usually found in the Tuamoto archipelago has given way to aito trees, a form of she-oak. "At home on Tuamoto we depend on the island for our livelihood but here it is dead," says an indignant Tuamotuan.
France carried out 193 nuclear tests on these two atolls from 1966 to 1996: 41 atmospheric and 137 underground tests, with a further 15 "safety trials". In 2006, the French ministry of defence acknowledged that 22 underground tests had given rise to the release of radioactive gases. Radioactive waste has been collected and buried in 27 pits on Mururoa.
Despite the repeated demands of the Polynesian authorities, a bill passed by the French parliament in 2010 disregarded the environmental consequences of the nuclear tests. It did, however, acknowledge their impact on public health and provide for compensation.
In January, the territorial assembly of French Polynesia voted in favour of a bill to rectify this omission. The next day France's upper chamber approved a motion that provides for Mururoa and Fangataufa, currently under the control of the defence ministry, to be restored to the Polynesian public domain, though the bill stands little chance of becoming law. "We realise that they are the two largest nuclear dumps in an ocean environment. But in Oceania you cannot separate human beings from their ecosystem," says the author of the bill, Senator Richard Tuheiva. "Restitution [of the atolls] is a way of soothing the psychological wounds [caused by the nuclear era]."
The bill provides for lasting "environmental remediation and constant monitoring of radiation and geological movement on the two atolls".
Every year the nuclear test centre monitoring department (DSCEN), a branch of France's arms procurement agency (DGA), takes samples from the land and lagoon of both atolls, and the surrounding ocean, publishing the results within two years. The most recent report, for 2009, notes "a low level of artificial radioactivity". But about 5kg of plutonium is trapped in the sediment at the bottom of the Mururoa and Fangataufa lagoons, according to the spokesman for the bill, the Socialist senator Roland Courteau. There is no question of them returning to "normal" use.
The test cavities still contain fission products and various radioactive substances. Two pits have been dug specially for the storage of nuclear waste.
The total activity of the waste that has accumulated in the Mururoa subsoil amounts to 13,279 terabecquerels (TBqs), according to a June 1998 assessment by the International Atomic Energy Authority. "That's 371 times the threshold for the classification of basic nuclear installations," says Bruno Chareyon, head of the committee for independent research and information on radioactivity (Criirad), a French non-profit laboratory. More than 3,200 tonnes of various types of radioactive waste was tipped into the Pacific, sinking to depths exceeding 1,000 metres off the coast of Mururoa and Hao island. In February last year, the defence ministry admitted that it was possible that part of Mururoa atoll might cave in, sapped by the underground tests. A landslide could lead to radioactive matter currently enclosed in rock being released into the sea.
"Mururoa is a real nuclear tip," says Maina Sage, a representative of the pro-autonomy Ia Ora te Fenua party in the Polynesian territorial assembly. She is demanding an independent study to assess the scope for consolidating the storage facilities and criticises the bill's failure to provide for declassification of the atolls. If the same rules for the treatment of nuclear waste applied here, as elsewhere, it would prevent the persistence "double standards".
For a long time the Polynesian authorities were fooled by the official story of clean tests and the prospects of economic development. Government secrecy neutralised their efforts too. But now they distrust what they are told. In July 2010, the former leader of the territorial council, Gaston Tong Sang, wrote to the then environment minister, Jean-Louis Borloo, and dared to suggest that the environment ministry – which would enjoy "greater independence and legitimacy" – should take charge of environmental monitoring.
To guarantee the transparency of information available to Polynesian residents, the bill requires the military authorities to task the Nuclear Radiation and Safety Institute (ISRN) with a specific mission for Mururoa and Fangataufa. Courteau thinks that the rules on military secrecy should be adapted to suit "the reality of the risks incurred", in which case a national commission would be set up "to monitor the impacts and effects of climate change on geomechanical stability and emissions of hazardous radioactive nuclides".
In his letter, Sang also asked for clarification of the radiation status of Hao, which was used as a forward base for the Pacific Experimentation Centre (CEP) and France's Atomic Energy Commission (CEA). This request was repeated in June 2011 by the DSCEN delegate from French Polynesia. A month later, on 11 July, the high commissioner, Richard Didier, refused to initiate further observations. He said that "all the results obtained show the absence of radioactive contamination". Contacted by Le Monde, the government representative in French Polynesia refused to answer questions.
Some 1,500 people live on Hao island. In 2009, the defence ministry started a huge environmental remediation scheme. A study of the extent of pollution, in particular by hydrocarbons and heavy metals, is due to be published by June.
This article originally appeared in Le Monde.
Posted by Overseas Review at 6:52 PM No comments: